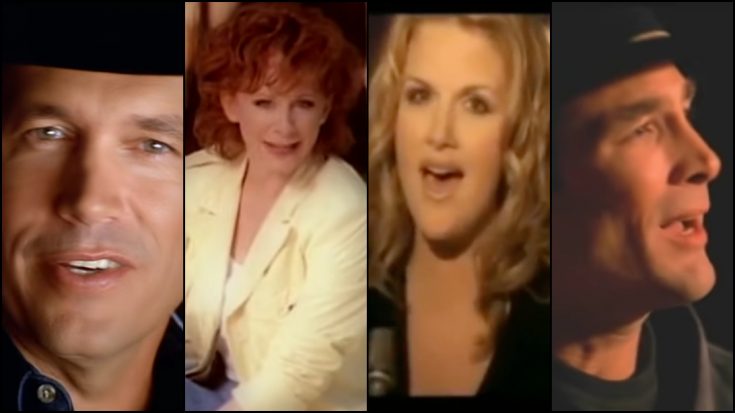 1997 was a memorable year for country music. The year saw 14-year-old LeAnn Rimes win a Best New Artist Grammy, Garth Brooks sing to a million people in New York City’s Central Park, and the release of Shania Twain’s record-breaking album Come on Over.

Other notable country music events from the year include George Strait’s “Carrying Your Love With Me” album sweeping the CMA Awards and the closure and demolition of Nashville’s Opryland USA theme park.

1997 also brought us some of the most greatest love songs in country music history, many of which are still on radio rotation (or on our favorite ’90s streaming playlists). Others have perhaps been forgotten but are worth listening to again. So, we’ve put together a list of country music love songs that turn 25 this year. Let us know which are your favorites and which songs you think should have made our list.

Released a year after they married, “It’s Your Love” was the first duet from Tim McGraw and Faith Hill. The first single from McGraw’s 1997 album Everywhere, the song was a massive hit and spent six weeks at the top of Billboard’s Hot Country Songs chart.

2. “I’d Rather Ride Around With You” – Reba McEntire

The third single from Reba McEntire’s 22nd studio album reached #2 on the Billboard Hot Country Singles Chart, kept out of the top spot by George Strait’s “Carrying Your Love With Me.”  The peppy, up-tempo tune was covered by Carrie Underwood for a demo album when she was only 13-years-old.

3. “Carrying Your Love With Me” – George Strait

Released in the spring of 1997, the song was the title track for George Strait‘s 17th studio album. Voted as one of the greatest songs of the 1990s, “Carrying Your Love With Me” earned Strait a Grammy nod and CMA and ACM Album of the Year awards.

4. “From Here to Eternity” – Michael Peterson

A beautiful ballad and ideal wedding tune, “From Here to Eternity” was a single from Michael Peterson’s debut album and the only song of his to hit No. 1 hit on the Billboard Hot Country Singles chart.

“Sittin’ On Go” was the fourth chart-topping hit from Oklahoma-born Bryan White. The song followed 1995’s “Someone Else’s Star” and ’96’s “Rebecca Lynn” and “So Much For Pretending.”

“She’s Got It All” was the first release from Kenny Chesney‘s I Will Stand album and became Chesney’s first number one hit on the US Billboard Hot Country Singles & Tracks chart, beating out his previously released singles, ” Me and You” and “When I Close My Eyes” which topped out at No. 2.

“I Only Get This Way With You” is arguably one of the most underrated love songs of the ’90s. The song was released as a follow-up single to Trevino’s only No. 1 hit, “Running Out Of Reasons To Run.”

“One Night At a Time” was the first single from George Strait’s multi-platinum album Carrying Your Love With Me. While the song is considered a love song, the dance-worthy tune tells of forbidden love with lyrics “I’m not yours, and baby, you’re not mine…”

“In Another’s Eyes” was released by Garth Brooks and Trisha Yearwood eight years before they became husband and wife. The song was their first major collaboration and earned the pair a Grammy award for Best Country Collaboration with Vocals.

“How Do I Live” was recorded by both Trisha Yearwood and LeAnn Rimes. But, it was Yearwood’s version that landed in the movie “Con Air” and was released as a country single. Rimes’ version went to pop radio.

Unlike most of the songs on this list, “How Your Love Makes Me Feel” is an uptempo, feel-good tune full of plays on words. The first single from Diamond Rio‘s Greatest Hits album, the song became the group’s longest-lasting No. 1 hit.

Co-written by Clint Black and Skip Ewing, “Something That We Do” was inspired by a book Clint was reading about human relationships. “There was a suggestion in the book that our relationships…would be more successful if we treated love as a verb instead of a noun,” Black said of the song that would earn him a Grammy nomination for Best Country Male Vocal Performance.

The third and final single from Mark Wills‘ self-titled debut album is arguably one of Mark Wills’ best love songs, despite never reaching the top of any charts. “Places I’ve Never Been” was one of 8 songs of Wills’ to land in the Top 10 of the Hot Country Songs charts.