Elvis Wanted To Record “I Will Always Love You,” But Dolly Turned Him Down 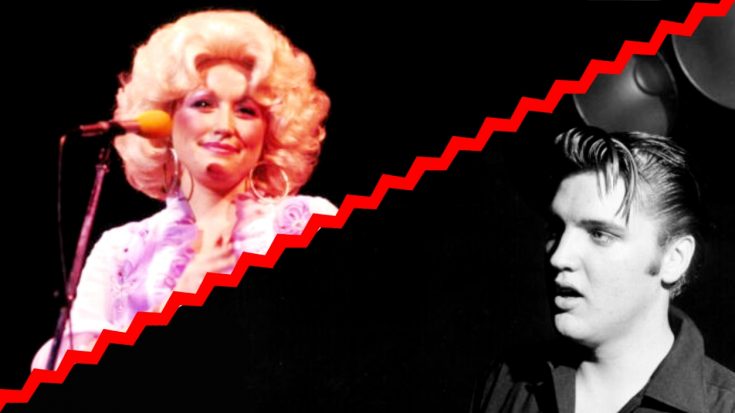 During the 1970s, two of the biggest names in the music industry were Elvis Presley and Dolly Parton. Both being superstars in their field, it was inevitable that the two would eventually cross paths.

But when they did, things didn’t turn out quite as well as either of them had likely hoped.

Both Presley and Parton had been in the music industry for many years by the time the 1970s rolled around. Presley was a well-established superstar who was enjoying a recent comeback, while Parton had been performing for years and was just starting to see her career flourish.

A highlight moment came in 1974, when Parton achieved her third number one hit with a song she wrote as a sort of “farewell” to longtime mentor and collaborator, Porter Wagoner. That little farewell song, titled “I Will Always Love You,” became something far bigger than Parton likely ever imagined.

It was remarkable enough that “I Will Always Love You” topped the country chart once. But what’s even more outstanding is the fact that it hit number one yet again in 1982 after Parton re-released the song to coordinate with its being featured in the film The Best Little Whorehouse in Texas.

Handing It Over To Houston

But as you well know, Parton isn’t the only artist to experience success with the song. In 1992, R&B artist Whitney Houston covered it for the soundtrack to the film The Bodyguard, which she also starred in.

Her version was a global phenomenon, and topped the charts in too many countries to even begin to list.

The success of Houston’s recording marked a big win for Parton as well. As its sole songwriter, she received (and continues to receive) royalties off of Houston’s rendition.

Since Houston’s recording did extraordinarily well, Parton ended up making millions off of it. This was only made possible because Parton held on to 100% of her rights as the songwriter.

However, years before Houston applied her voice to “I Will Always Love You,” another iconic artist wanted to record it. And that artist, or at least, his management, wasn’t willing to let Parton have her full rights to the song.

That artist was Presley.

A Painful Answer To A Dream-Like Request

During an interview with Event magazine in 2018, Parton explained how long ago, Presley’s manager Colonel Parker came to her and expressed that Elvis was interested in recording “I Will Always Love You.”

Parton was obviously overjoyed and honored, but there was a catch. Parker told her that in order for Presley to record the song, she would have to give up half of her songwriting rights.

Faced with one of the toughest decisions of her life, Parton was torn. She desperately wanted to hear Presley sing “I Will Always Love You,” but was unwilling to give up her rights as its songwriter.

Dolly Parton stopped Elvis Presley recording 'I Will Always Love You'.
She called off their agreement when his representatives told her she had to sign away the publishing rights to the song. #Grammys pic.twitter.com/dxga8yDc0d

In the end, no matter how much it hurt, she knew what she had to do.

“It’s my song, my publishing rights,” she said. “It broke my heart but I had to turn him down.”

It wasn’t easy for Parton to say no to “The King.” In an interview with CMT in 2006, she confessed that she “cried all night” after she informed Parker that she couldn’t give up her rights.

But as painful as it was turn Presley away, Parton knew in her heart that she had made the right choice.

“Something in my heart says, ‘Don’t do that.’ And I just didn’t do it, and they just didn’t do it. But I always wondered what it would sound like. I know he’d kill it. Don’t you? He would have killed it.”

The Payoff In Parton’s Decision

As we all know, Parton’s heartbreaking decision paid off. When Houston came around and wanted to record the song nearly two decades later, Parton still had all of her songwriting rights intact.

“Then when Whitney [Houston’s version] came out,” Parton said in her CMT interview. “I made enough money to buy Graceland.”

Funny how such a heartbreaking situation ended up turning out for the best, isn’t it?

While we will never know what Presley would have sounded like singing “I Will Always Love You,” we’re alright with that. Parton got to hang on to the song, and ended up making it something greater than she probably ever dreamed.

It still enchants us to this day, no matter who we hear sing it. But despite the success of the other versions that followed hers, Parton’s is the one we will always love.