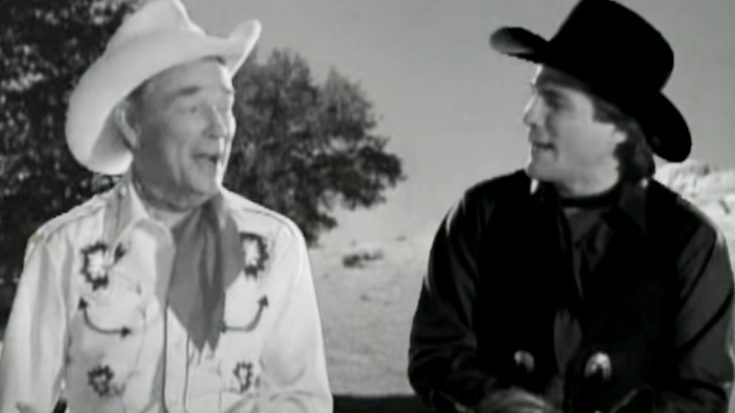 Roy Rogers’ 1991 album Tribute was the talk of the country music world when it debuted, and the album ended up being Rogers’ highest-charting creative endeavor. The album tried something new for Rogers — cross-generational tracks that allowed a new generation of country music fans to enjoy all that the yodeling Rogers had to offer.

The first time I heard I looked like a young Roy Rogers was when Jim McGuire, who took this photo, said so! pic.twitter.com/uWfStzmwTy

Clint Black teamed up with Rogers for the hit single “Hold On Partner.” The song wasn’t written specifically for Rogers and Black, rather, it was written by Larson and Bobby Paine. The cowboy sing-a-long was a hit among country music fans in all age groups.

Black wasn’t the only superstar featured on the album — The Oak Ridge Boys, K.T. Oslin, Emmylou Harris, and Lorrie Morgan were also featured.

A lot of good things have been coming to me; here’s one with me performing “Hold on Partner" with Roy Rogers at the 25th Anniversary of the CMA Awards at the Grand Ole @Opry in 1991! #30YearsIn30Days #StillKillinTime #ThisOldHouse pic.twitter.com/vlFBkA1xuf

The pair earned a Grammy nomination for Best Country Vocal Collaboration, and they performed the song at the awards ceremony.

Check out the full music video below featuring these two beloved country legends and let us know if you remember the first time you heard this song!