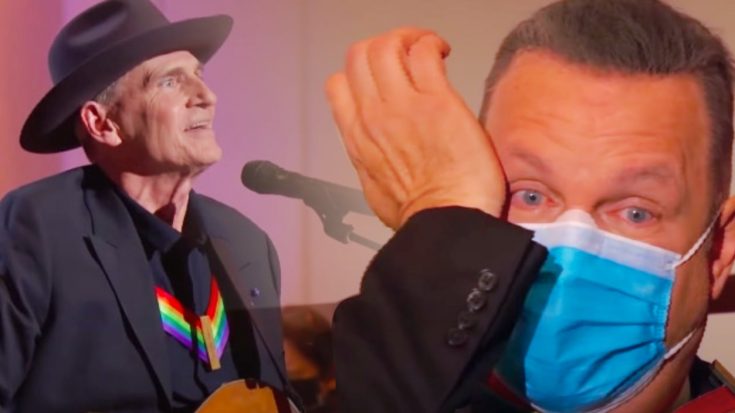 In 2021, Garth Brooks was recognized during the Kennedy Center Honors in Washington D.C. He was celebrated alongside Dick Van Dyke, Debbie Allen, Joan Baez, and Midori.

He was honored with a series of performances. Artists such as Kelly Clarkson and Jimmie Allen paid tribute to Brooks by singing some of his iconic songs, including “The Dance” and “Friends in Low Places.”

2016 Kennedy Center Honoree James Taylor also tipped his hat to Brooks during the ceremony. He delivered a performance of Brooks’ 1992 single “The River.”

I am humbled and grateful to EVERYONE that has celebrated this music over the years, this is OUR honor TOGETHER. To the singers and players who perform in the show tonight, thank you for making me fall in love with the music all over again.  gratitude, respect, love, g  #KCHonors pic.twitter.com/6bP5XvAou3

“The River” was released as the final single off of Brooks’ album Ropin’ the Wind. It became Brooks’ ninth number one song. It is a staple of his concert setlists to this day.

29 years after “The River” was released, Brooks got the chance to sit back and listen to Taylor honor him with a cover of the song. Taylor shared a short video of his performance, and it’s touching to witness.

At one point, the camera cut to show Brooks, who was crying. He wiped several tears away from his eyes as he continued to listen to Taylor’s rendition of “The River.”

Watch Taylor sing and see Brooks’ emotional reaction in the video below. You can tell how moved Brooks was by Taylor’s performance.

Congratulations to Brooks on being recognized as a Kennedy Center honoree!