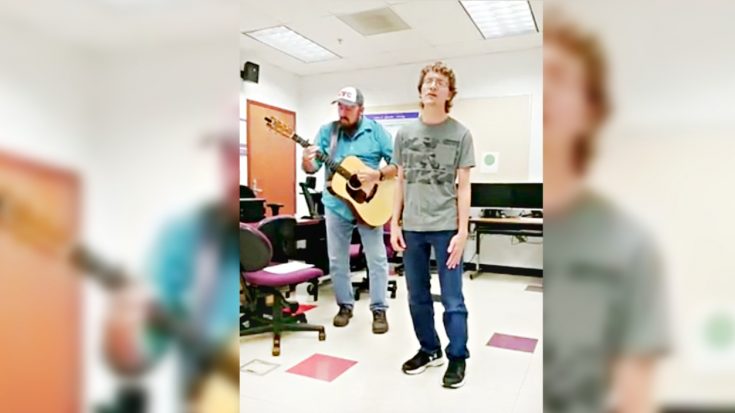 Sometimes great things happen when you least expect it. For this young man and his guitar instructor, that moment just happened.

When Steven Joseph decided to sing a Mark Wills country hit for his class assignment, he had no clue he would go viral almost overnight. The young man was joined by guitar instructor, Chris Rose, for a performance they thought was worthy of a good grade – but never imagined that it would reach the public as far as it did.

As of February 2019, the video has over 8.6 million views on Facebook alone.

Reminding Us We’re All Human

Wills first sang “Don’t Laugh At Me” in 1998 and it made people really think about how we are all the same – and how we should treat each other so.

With lines like, “You don’t have to be my friend/ But is it too much to ask/ Don’t laugh at me/ Don’t call me names/ Don’t get your pleasure from my pain/ In God’s eyes we’re all the same/ Someday we’ll all have perfect wings” the song goes through the struggles people face from the time they are young until they have grown.

The song was a plea for people to be kinder to each other and highlights the fact that we all have our struggles to deal with. It truly struck a chord with both the bullied and bullies alike.

Joseph and Rose decided to record themselves singing and playing the guitar for an Intermediate Lead Guitar Class at Mountain Empire Community College. Joseph put his heart and soul into the performance as his deep vocals carried the heart-wrenching tune. In the background, Rose strummed his guitar, perfectly keeping the beat for Joseph to belt out the 1998 song.

Set in a classroom, the performance seems to remind us of what kids often go through with bullying. The performers plead for a better world where kindness comes first. You can watch their full performance in the video below.