Kenny Chesney Has A Love Song Co-Written By Ed Sheeran, ‘Tip Of My Tongue’ 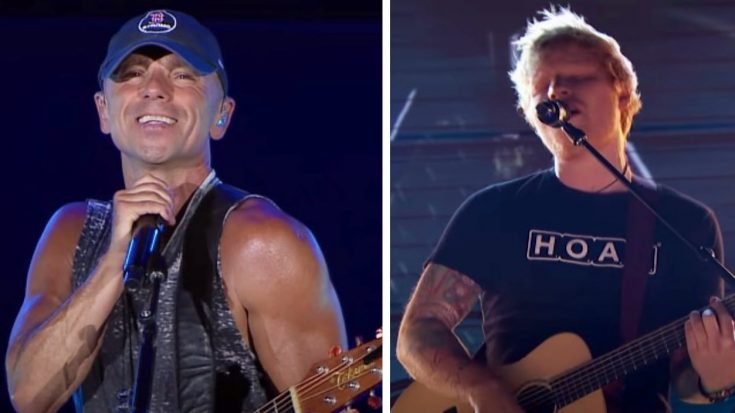 In early July 2019, Kenny Chesney shared some exciting news with his fans. That’s when he revealed his plans to release a brand-new song titled “Tip of My Tongue.”

Chesney spoke about the song in a press release, sharing that he co-wrote it with longtime collaborator Ross Copperman and another famous figure, superstar singer Ed Sheeran.

Although Sheeran’s music generally falls under the pop umbrella, he has collaborated with country artists many times before. He worked with Taylor Swift during her country days, co-wrote Keith Urban‘s song “Parallel Line,” and more recently, recorded a collaborative track with Chris Stapleton titled “Blow.”

So after all of that, it makes perfect sense why Chesney and Sheeran ended up crossing paths and decided to write a song together. In the press release about “Tip of My Tongue,” Chesney shared what it was like writing with Sheeran:

“As a co-write with a new writer, it’s one of the most fun sessions I’ve done in a long time,” he said. “I get why people love working with him.”

The two teamed up with Copperman to write a steamy love song. Chesney explained their train of thought when it came to writing, and how they used the common phrase “Tip of My Tongue” as inspiration:

“It’s funny how a figure of speech can lead you to all kinds of places. You start talking, and words fall out, and anything can happen. When you go in and write on any given day, the chemistry is what it is. When the idea fell out, we all just laughed and went, ‘Well, what can we do with that?‘”

What they ended up doing was penning a song that is somehow both subtle and sultry at the same time. With lyrics such as “Well I love you from the morning till the setting sun…” the song made plenty of country girls swoon when the song debuted.

See what effect the song has on you be tuning in to its official audio clip below. The song became a huge hit, and peaked at the #8 spot on the Country Airplay chart.

What do you think of the song? Let us know!