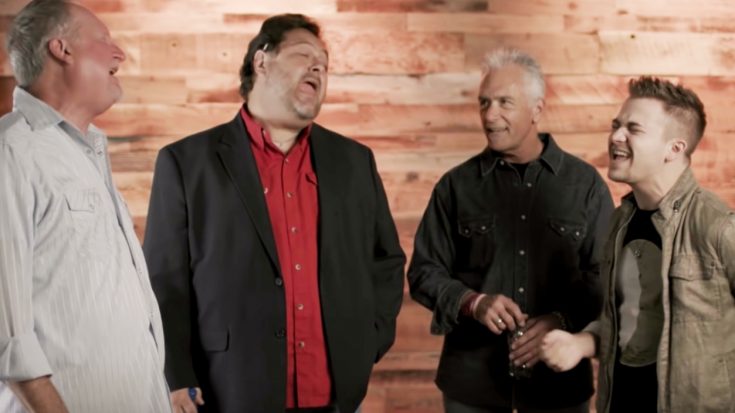 “Meet In The Middle” put Diamond Rio on the map back in 1991. Needless to say, the catchy tune inspired hundreds of hopeful country artists to try their hand at the business. One such singer is none other than award-winning Hunter Hayes.

In this exclusive interview, he opens up about the influence of the song on his own music and is even treated with an exciting surprise…

When Diamond Rio was introduced to the world, they came in like a wrecking ball. Their debut single, “Meet In The Middle” quickly reached #1 on the U.S. Billboard Hot Country Singles & Tracks. This feat had never been done before, making the group the first country music band in history to have a debut song reach the top of the charts.

The twangy tune reached the hearts of millions – and gave us some great relationship advice. With lines like, “We’d gain a lot of ground/ ‘Cause we’d both give a little/ And there ain’t no road to long/ When you meet in the middle/ Babe I love the way we work it out/ That’s what love’s about” it’s no wonder it became an instant country hit!

Hard to believe this was 25 years ago…. I still have the trophy, wish I still had the hair! Great memories @cma. -Gene Johnson • • • #cmaawards #anniversary #cma #countrymusic

During an interview with The Grand Ole Opry, Hunter Hayes explained just how influential Diamond Rio was on his own life and musical style. He told them, “I used to try and sing like Marty because I just loved his voice.”

We can’t blame him for that – who wouldn’t want to sing like these legendary artists?! The best part, Hayes got to meet his idols during the interview after the camera crew let them in for a very special surprise.  Hayes couldn’t hold back his excitement. He was smiling the entire time obviously overwhelmed with emotions.

He opened up to the band saying, “It’s good for my soul to hear you guys.”

As if meeting the superstar group wasn’t enough – Hayes even got to take part in an impromptu jam session of their hit song. They came together and perfectly performed the twangy tune – each adding their unique sound to the classic.

You can watch the full interview and performance below!

When you get the chance to duet with your greatest musical influence … It was a pinch me moment for Hunter Hayes when Diamond Rio surprised him backstage at the Opry!