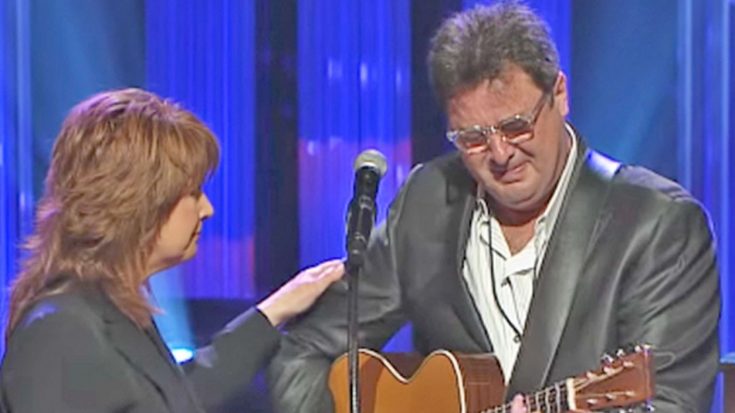 The entire country music world was rocked when George Jones passed away on April 26, 2013 after being hospitalized for a high fever and irregular blood pressure.

Each country singer gave incredible tribute performances to The Possum, but one that stood out among the others was Gill’s duet with Loveless. Together, they sang the heartbreaking eulogic song “Go Rest High On That Mountain,” which Gill began writing after the death of country legend Keith Whitley in 1989.

Gone but not forgotten! We Remember.

He didn’t finish the song until after his brother passed away in 1993 from a heart attack.

“Brother George taught us all how to sing with a broken heart,” Gill said to the audience before starting the heart-wrenching song.

Within seconds of beginning the song, you can already hear the sadness in Gill’s voice, shaking from holding back tears. At one point in the chorus, the performance becomes too much for Gill, forcing him to take a step back from the microphone, allowing Loveless to sing the chorus for him.

With tears in their eyes, you can see Garth Brooks, Trisha Yearwood and Jamey Johnson rise to their feet to pay respects to Jones, and stand in solidarity with Gill, who was crying himself.

Mid-performance, Gill breaks down, but continues delivering a mind-blowing guitar solo. Loveless walks over to him to console him during this guitar break. You know just by the look on his face that he poured his heart and soul into this tribute.

Keep the tissues close for this one, folks. We barely got through it without crying. Watch the heartbreaking performance below.