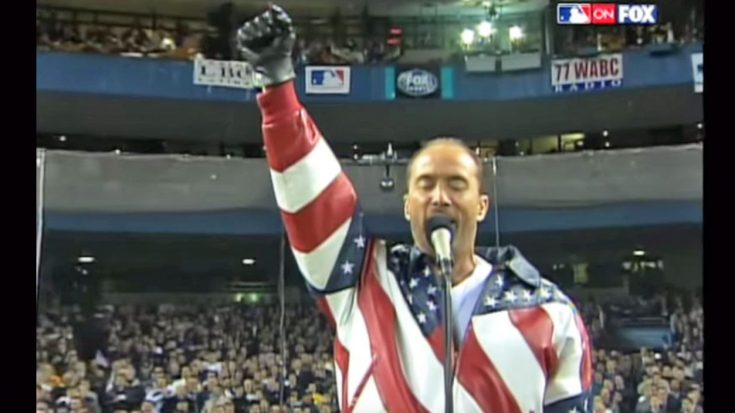 Lee Greenwood‘s powerful ballad moved millions to tears during the World Series following the 9/11 Terrorist Attacks. He walks onto the field in a patriotic jacket and delivers an unmatched performance in Yankee Stadium.

We would like to wish Mr. Lee Greenwood a very Happy Birthday! Thank you for your support of Habitat for Humanity Williamson-Maury and our veterans. #leegreenwood #habitatheroes

Posted by Habitat for Humanity Williamson-Maury on Tuesday, October 27, 2015

Singing his best-known single “God Bless The USA”, Greenwood will give you goosebumps in this heart-wrenching tribute to America in honor of the lives lost.

Still get choked up going back and watching Lee Greenwood perform “God Bless The USA” in 2001 at Yankee Stadium for the World Series a month after 9/11. “The flag still stands for freedom and they can’t take that away!” #GodBlessTheUSA pic.twitter.com/080qdYN9sb

Greenwood went from his homegrown church choir to an iconic artist with the launch of this single. Written by Greenwood himself, “God Bless The USA” was released in 1984 and reached No. 7 on the Billboard chart. Following its instant success, it was then played during the 1984 Republican National Convention with Ronald & Nancy Reagan attending.

Lee Greenwood was born on this day in 1942. "God Bless the USA" was released in 1984 and re-gained popularity after the 9/11 attacks. pic.twitter.com/VXxOCif7mm

The popularity of this hit single gained immense traction following the tragic events on September 11th, 2001 and quickly reached No. 16 on Billboard’s Hot 100 chart. As of 2015, Greenwood’s patriotic performance has gone double platinum – selling over one million copies in the United States alone.

This is a MUST-WATCH performance for every patriotic American. God Bless The USA.