These 9 Facts Are All About “The Andy Griffith Show” 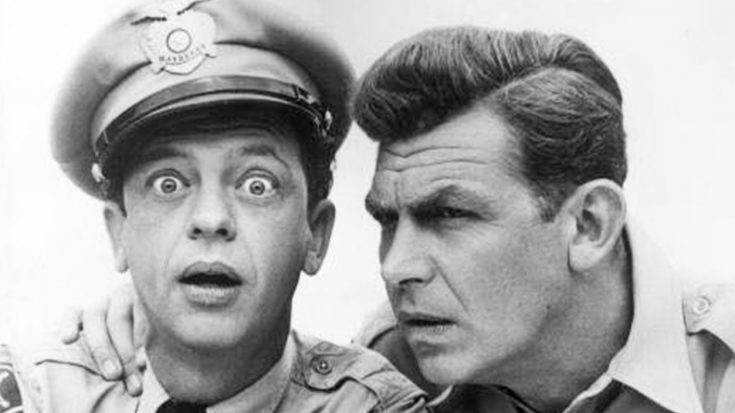 Sheriff Andy Taylor kept the community in line alongside his sidekick Barney Fife as they dealt with unruly moonshiners and criminals. The show has since gone on to be ranked as ninth-best show in American television history.

Posted by The Andy Griffith Show on Wednesday, August 6, 2008

While it’s no question that The Andy Griffith Show was one of America’s greatest, there are some facts about the sitcom that even the biggest fans don’t know.

1. Andy’s Character Was Supposed To Be The “Funny Guy”

Originally, the concept for the show had Andy as the comedian character. After Andy saw Don Knotts in the very first episode, he knew the characterBarney was meant to be the funny man of the show. It unfolded perfectly as Knotts played out the part perfectly.

You’ve been arrested in Mayberry. What’s the charge?(Mayberry-appropriate/family-friendly responses only, please, as always)

Posted by The Andy Griffith Show on Saturday, January 27, 2018

2. A Special Tribute To His Father

During the opening credits of the show, you see Andy walking with his son Opie down the road together. Opie throws a rock and Andy nods his head in acknowledgment. This was Andy’s personal tribute to his own father, who would shake his head similarly, signifying a “good job.” It inspired his role as a father in the TV show as well.

"The backbone of our show was love, and I think that, more than anything else, made it successful." – Andy Griffith

Posted by The Andy Griffith Show on Friday, November 6, 2015

3. It Was A Spin-Off Sitcom

The concept for The Andy Griffith Show actually stemmed from a 1960 episode on The Danny Thomas Show, called “Danny Meets Andy Griffith.” In the episode, Andy played Sheriff Andy Taylor who arrests Danny for running a stop sign. Even future cast members of the show were featured in the episode: Frances Bavier and Ron Howard who played Henrietta and Opie, respectively.

4. Don Knotts Didn’t Have A Contract On The Show

While Barney’s character went on to be one of TV’s most beloved characters, it almost didn’t turn out that way. Knotts starred in the pilot without even having a formal contract! When invited on the show, the producers had no idea they would love his character so much. After watching him, they gave him a contract the next day.

Andy’s real-life wife, Barbara Bray Edwards got some screen time during the show as well. Barbara made some background appearances on season four of the series including both “The Song Festers” and “Opie Loves Helen” episodes. Andy and Barbara were married from 1949-1972 and adopted two children together.

Andy Griffith and his first wife Barbara, mother of his children Sam and Dixie- on the set of No Time for Sergeants. She passed away in 1980, divorced for several years from Andy.

6. One Of The Actor’s Identities Remains A Mystery

The man who played Mr. Schwamp (sometimes called Mr. Schwump) still remains a mystery to this day. He played a citizen of Mayberry in 26 episodes and even in the spin-off Mayberry R.F.D. It has been claimed that the extra has also been seen in the 1945 classic, Christmas In Connecticut. A sitcom mystery at best…

Fun Monday fact: The Andy Griffith Show. There was a character named Mr Schwump (sometimes Schwamp). He never had any…

Although the pair had a loving relationship on the show, behind the scenes things were much different. Frances Bavier, who played Aunt Bee, took her job very seriously. She didn’t care much for Andy’s off-screen practical jokes and behavior. Although they didn’t get along throughout the series, they patched things up before her death in 1989.

Posted by The Andy Griffith Show on Tuesday, December 19, 2017

8. A Connection With “Gone with the Wind”

Although most of the scenes from The Andy Griffith Show were filmed on the eastern part of the studio, Sheriff Andy’s house sat right next to the “Aunt Pittypat House” from the 1939 film, Gone with the Wind! Andy’s house was so close that you could walk out of the courthouse, look right, and there was the old Atlanta train station from the film. Turns out, the train station was featured in a ton of the show’s episodes.

Have you ever been to a real-life town like Mayberry?

Posted by The Andy Griffith Show on Tuesday, March 3, 2015

9. Going Out With A Bang

The Andy Griffith Show went off air in 1968 in the most successful way possible: right at number one. The show was still topping the Nielsen ratings regardless of its farewell. To begin with, the show never even placed lower than seventh in the ratings. Amazingly, only three shows in television history, including The Andy Griffith Show, have ever left the air while holding the number one spot: I Love Lucy in 1957 and Seinfeld in 1998.

Posted by The Andy Griffith Show on Wednesday, January 31, 2018

The Andy Griffith Show will forever go down in history as an American classic! Although it’s a crowd favorite, we didn’t know all these behind the scenes secrets! Did any of these surprise you?