Garth Brooks, Trisha Yearwood and Keith Urban Team Up For “Fishin In The Dark” 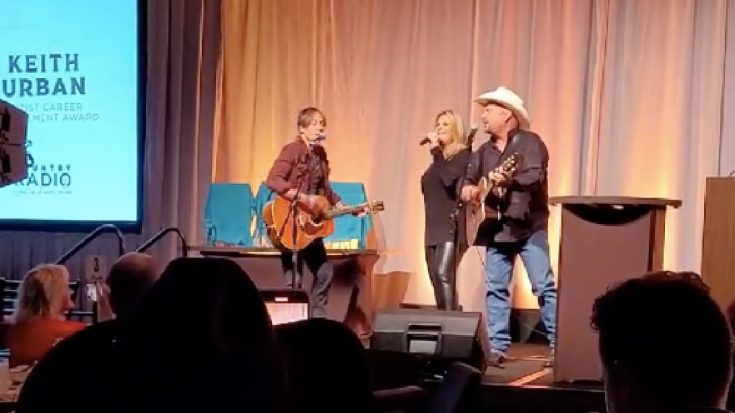 It was a big night in Nashville as some of the town’s biggest stars were out in full force for some major events. The happenings led to some great performances, some planned and some impromptu, including a trio of legends performing one of country music’s biggest hits.

On Wednesday night (October 13) in Music City, Randy Travis was honored with the CMT “Artist of a Lifetime” Award. Singer Kane Brown honored Travis with a cover of his 2002 song “Three Wooden Crosses.”

Garth Brooks was on hand to reflect on Randy Travis’ impressive career before presenting him with the “Artist of a Lifetime” Award. But, that wasn’t the last stop for Garth who made his way to the Country Radio Hall of Fame where Keith Urban was being honored with the 2021 CRB Artist Career Achievement Award.

“The award is presented to an individual artist or act who, through their creativity, vision, performance or leadership, has made a significant contribution to the development and promotion of country music and Country radio,” according to CRB. Previous recipients include Rascal Flatts, Steve Wariner, Martina McBride and Randy Travis.

While most of the night’s festivities were broadcast, Keith’s honor was not. But, that thankfully fans were on hand to capture the moment that Garth Brooks and Trisha Yearwood joined Keith Urban on stage to perform the 1987 Nitty Gritty Dirt Band hit, “Fishin’ in the Dark.”

Videos show Garth and Keith rocking the tune on their guitars while singing the familiar lyrics as Trisha joins them with harmonies.

Garth also chose to deliver a solo cover of Keith Urban’s song “You’ll Think Of Me,” the fourth and final single from Urban’s 2002 album Golden Road.

Watch a clip of Garth, Trisha, and Keith performing “Fishin’ in the Dark” together below.