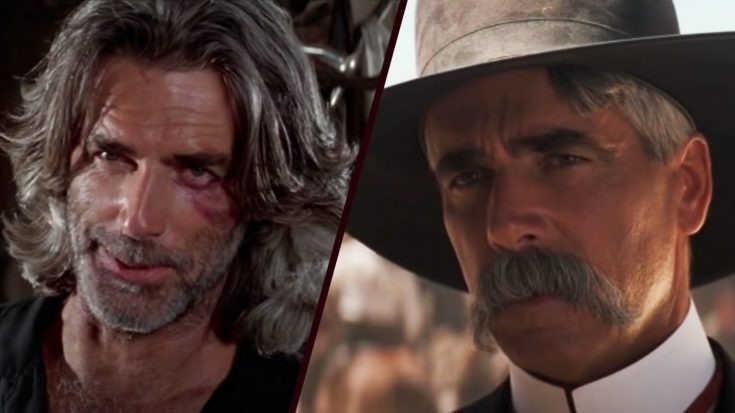 Sam Elliott is a force to be reckoned with. He’s appeared in dozens of iconic projects, making him one of the most admired actors in the world.

It isn’t easy to rank Elliott’s best works. But we tried our best to compile a list featuring seven of his standout roles.

These projects are listed in the order of their release…not in the order of which ones we think are the best. If you’ve followed Elliott from the start, you’ll love looking back on his career with us.

Elliott was already an established star when he appeared alongside Patrick Swayze in the 1989 action film Road House. Swayze portrayed a character named James Dalton, and Elliott played his mentor, Wade Garrett.

Years later, Elliott reflected on how amazed he was by Swayze’s talent. “I remember watching Patrick and thinking, that was so good,” he said.

Elliott was made to be a Western movie star. Some of his earliest roles were small parts in Westerns such as Butch Cassidy and the Sundance Kid and The Way West.

By 1991, Elliott had worked his way up to lead status. He portrayed the title character in the made-for-TV western movie Conagher. His real-life wife, Katherine Ross, played his love interest in the film.

Elliott earned his first Golden Globe nomination for his work on Conagher.

Almost everyone has heard the story of the Earp brothers and the O.K. Corral. That story came to life on the big screen when Tombstone was released in 1993.

Elliott played Virgil Earp, who was a real person. Virgil was a deputy U.S. Marshal and the City Marshal of Tombstone, Arizona.

Elliott was not the star of the Coen Brothers’ 1998 comedy film, The Big Lebowski. But his performance as “The Stranger” still made a lasting impression.

Even those who have never seen any of Elliott’s other projects can recognize him thanks to his part in The Big Lebowski.

In a 2019 interview with EW, Elliott spoke about how excited he was when he got the movie’s script. He was anxious to break out of the cowboy role for once. But when he realized The Stranger was yet another cowboy character, he felt a bit defeated. Though he can now look back on that moment and laugh.

Lucky for Elliott, his part in The Big Lebowski led him to future roles outside the Western genre. “So, I went from feeling boxed-in, into just realizing how thankful I was that that was the box I was in, because it just led to all this other great work,” he said.

Speaking of projects outside his typical “box,” Elliott got a rare chance to showcase his comedic chops in the Netflix comedy series, The Ranch. Elliott played Beau Bennett, a veteran, ranch owner, and father of two sons.

Elliott made us laugh countless times over the course of The Ranch‘s four-year run. Seriously, who can forget that hilarious almond milk scene?

Elliott received renewed acclaim when he portrayed Bobby Maine in the 2018 adaptation of A Star is Born. The movie also starred Bradley Cooper and Lady Gaga.

Viewers and critics alike were wowed by Elliott’s performance in the film. This led to him receiving his first nomination at the Academy Awards.

When news broke that Elliott had been cast as one of the stars of the new Yellowstone prequel series 1883, people went wild. The series kicked off on December 19, 2021, and viewers were captivated by Elliott’s performance as Shea Brennan.

Head below to watch Elliott speak about his introductory scene in 1883 and why it was one of the most emotional scenes he’s ever filmed.

Which one of the projects featured in this list is your favorite of Elliott’s?