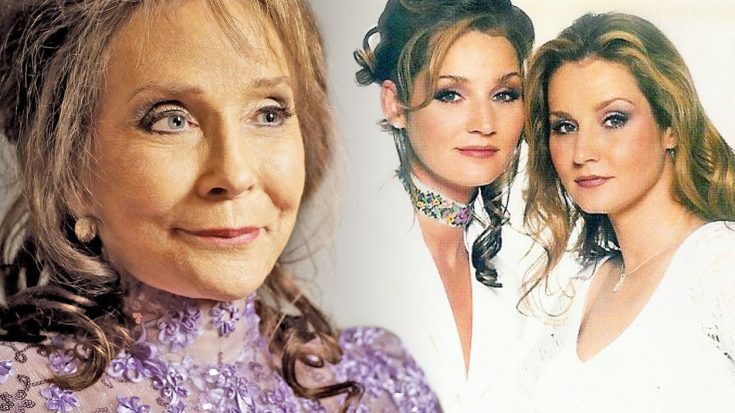 Loretta Lynn definitely gave her twin daughters, Peggy and Patsy, the talent gene. In 1998, Peggy and Patsy decided to follow in their mother’s footsteps and created the country music duo, The Lynns.

In a 1998 interview with People, Loretta expressed that she always wanted the girls to work together. She said, “I thought they should work together. But I had to wait till they took a notion to do it themselves.”

And sure enough, they did! Their self-titled first album featured the fiery song about “the other woman,” called “Woman To Woman.” The song was a huge hit for the sister duo and got them a CMA nomination for Vocal Duo of the Year in both 1998 and 1999.

In the video below, Peggy and Patsy performed on the television show Girls’ Night Out hosted by some of country music’s leading ladies, Jo Dee Messina, Terri Clark, and Tanya Tucker. The Lynns talked about the song and how close-to-the-heart it was because for them because it came from personal experience.

The duo said, “Songs that are written by the artist that sing them, I think that’s really important, especially because, for this song, in particular, you had to be there and really experience that to write it.”

The Lynns then hopped on stage and dedicated the song to the audience, saying, “This is for all you ladies here tonight,” and the crowd went wild! Peggy and Patsy were stunning, and we’re sure y’all will love them as much as we do!

Check out the video below and prepare to be blown away.