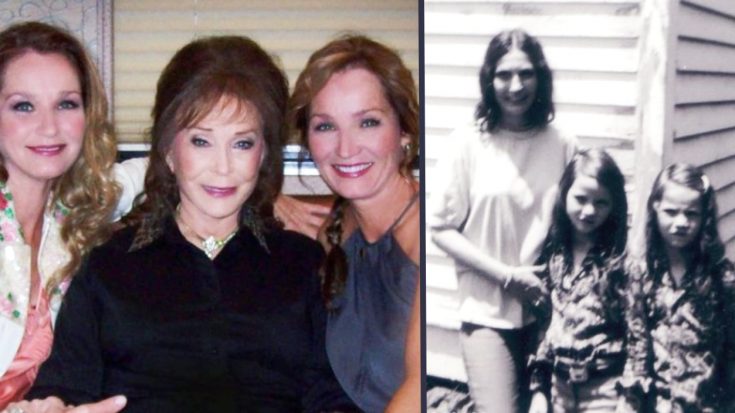 On top of being a country music star, Loretta Lynn is a mother of six. She and her late husband, Oliver “Doolittle” Lynn share four daughters and two sons.

The couple’s two youngest children are twins, Peggy and Patsy. They were born on August 6, 1964

Peggy was named after Loretta’s younger sister. As for Patsy, she was named in honor of Loretta’s dear friend Patsy Cline, who passed away in 1963.

As adults, Peggy and Patsy formed the country music duo The Lynns. They released one album and had two singles land on the Hot Country Songs chart. The Lynns were nominated for Vocal Duo of the Year at the CMA Awards twice (in 1998 and 1999).

Even though Peggy and Patsy haven’t recorded as The Lynns in years, they still sing together from time to time. Patsy has also served as the co-producer of Loretta’s past four albums, including her most recent release, Still Woman Enough.

The twins had their 57th birthday on August 6. Loretta celebrated her daughters’ special day by sharing a bunch of old family photos along with a loving message.

Most of the photos Loretta shared show Peggy and Patsy as young children. She also included a few photos of them in more recent years.

“They’ve been a handful since day one,” Loretta said of the twins. “They were daddy’s girls right out the gate and, boy, did they have him wrapped! They’ve become momma’s girls in a big way and my best friends.”

Loretta said she “was sure shocked to have twins” when she did, but now knows she “wouldn’t trade them for the world.”

You can read Loretta’s note and see all of the family photos she shared by checking out her post below. We hope Peggy and Patsy had the happiest of birthdays!