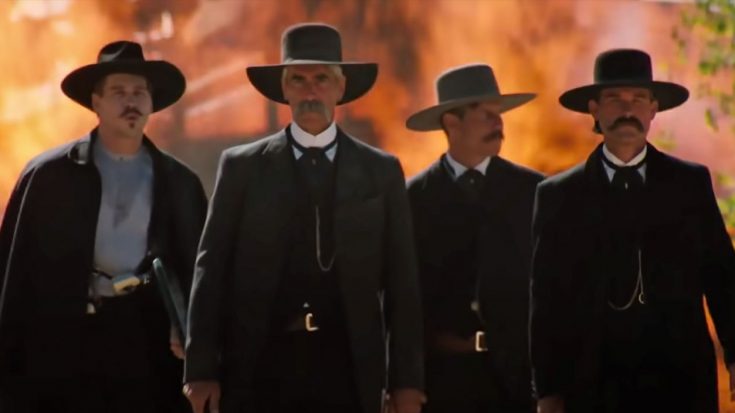 Tombstone was a film released in 1993 that set the precedence for westerns.

Perhaps one of the greatest things about the movie is the star-studded cast containing Kurt Russell, Sam Elliott, Val Kilmer, Bill Paxton, and Powers Boothe.

Here are some fun and interesting facts that you may or may not know about the western classic.

Tombstone is based on historical events that took place in Tombstone, Arizona during the 1880s, including the Gunfight at the O.K. Corral, which was a 30-second shootout between lawmen and a group of outlaws. Even the characters were based off of real people.

2. It was actually directed by Kurt Russell.

The credits for Tombstone declare that it was directed by George P Cosmatos, however, years later it was revealed the real director was Kurt Russell himself. Kurt swore to Cosmatos that he wouldn’t say anything about it until after the director’s death, and sure enough it wasn’t something he revealed until 2013, nearly 10 years after Cosmatos had died.

3. Willem Dafoe was almost in the movie.

Val Kilmer’s portrayal of the infamous Doc Holliday has become iconic. It’s hard to imagine anyone but Kilmer in the role, but at one point the part was going to go to Willem Dafoe. The producers felt it would be too risky to hire Dafoe since five years earlier he had appeared in the highly controversial film, The Last Temptation of Christ.

4. Sam Elliott got knocked in the head.

We love Sam Elliott as the stoic Virgil Earp in "Tombstone". Who is your favorite of the O.K. Corral gunfighters? pic.twitter.com/cHh1Lmq8Th

In the movie there is a scene where Sam Elliott’s character, Virgil Earp is shot, and then later staggers into the bar. He collapses in pain, and his brothers go to help him up. If you watch closely, you might notice that during the filming of this scene, Kurt Russell accidentally bumped Elliott’s head into the side of the bar while helping him up. Thankfully, the injury wasn’t serious.

5. The mustaches were real.

If we're gonna have a future in this town, it's gotta have some law and order!

Most of the time in Hollywood movies facial hair can be glued onto an actor’s face – not in Tombstone though. To make things as realistic as possible, each one of the actors grew out their own mustache.

Doc Holliday and Wyatt Earp were known to frequent Colorado during the state's wild west past. A new book lays out some of their more memorable gun battles: https://t.co/1gGqAsAZ7a pic.twitter.com/4e5nDyzUML

Playing Doc Holliday and Wyatt Earp, Val Kilmer and Kurt Russell bonded during the filming of Tombstone and became good friends by the end. As a joke, Kurt surprised Val by buying him a grave plot in Tombstone, Arizona. Unbeknownst to Kurt, Val had a similar idea to buy a gag gift, and ended up gifting him with a piece of property in the town as well. Neither one of them had any idea what the other had planned until they actually exchanged the gifts.

Throughout the movie, Doc Holliday has quips and one-liners that people often quote to this day. The interesting part about this is many of those lines were taken from newspapers that had recorded Holliday’s words.

8. Wyatt Earp’s 5th cousin was in the movie.

The role of Billy Claiborne was played by Wyatt Earp, a fifth-generation cousin of the historic lawman who also bears his name.

Watch the clip from the movie below of the infamous gunfight at the O.K. Corral.