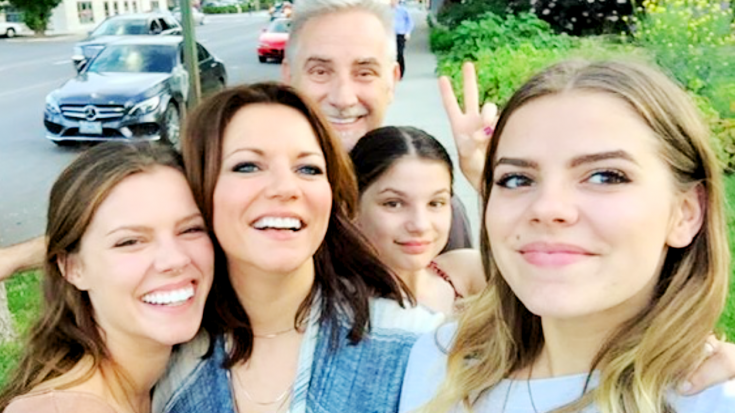 During the 1990s and early 2000s, Martina McBride was one of the most popular artists in country music. During those years she earned numerous hit singles, including songs such as “A Broken Wing,” “Wild Angels,” and “This One’s For the Girls.”

She was also one of the most decorated female vocalists in the industry, earning awards and nominations from the CMA, ACM, and the Grammys.

But right in the height of her career, Martina made the decision to spend less time on the road and more time at home. Why? Because she became a mother.

Martina and her husband, John, welcomed their first child, a daughter they named Delaney, on December 22, 1994. She was followed by a second child on March 29, 1998, another girl. Martina and John named her Emma.

Country fans were introduced to the girls at a young age when they both had starring roles in the music video for their mom’s heartwarming single, “Blessed.” The video was released in late 2001, meaning the girls were only seven and three when it was filmed.

But the McBrides weren’t done adding to their brood. Another daughter came into the world on June 20, 2005, and they named her Ava.

The Girls Have Grown Up So Much…

Even prior to Ava’s birth, Martina had scaled back her schedule significantly, saying she was willing to put touring on hold so she could be a present figure in her daughters’ lives.

Thanks to Martina and John, the girls have become lovely and kindhearted young women.

While it seems like they were just born, they are already all grown up. Boy how time flies!

So you can see just how grown up the McBride girls are now, we’ve gathered 10+ photos that show you how they’ve changed since the last time you saw them. Go ahead and look through those photos below!

Martina’s daughters don’t just have a country singer as a mom, they apparently like attending other country artists’ concerts as well!

Back in the summer of 2016, Martina and her two eldest, Delaney and Emma, went to go support another country music superstar…Tim McGraw! And of course, they had to take a photo together to mark the occasion.

In the caption, Martina recalled how she opened for Tim years ago when she was just getting started in her career. “…and all these years later he’s still absolutely killing it,” she wrote.

Martina shared not one, but two photos to celebrate youngest daughter Ava’s 12th birthday in 2017. The first photo shows the little McBride and her mama trying out a cute bunny filter on their faces, and they both look sweet as can be!

If you scroll through the slideshow, you’ll see a second photo of just Ava, without the bunny filter this time around. She’s growing up to look more and more like her big sisters with each passing day.

Part of growing up means spreading your wings and taking off on your own, which is exactly what Emma did in September 2017. She stopped to take this loving photograph with her mother before heading off to chase her dreams as an actress in California.

Martina reflected on the emotional day in the photo’s caption, writing, “And the world will fall in love with her. Because she has that kind of magic. And that kind of heart…You know I believe in you and I’m so proud of you my brave, sweet girl. I love you.”

Martina got super sentimental on the day that her eldest, Delaney, celebrated her 23rd birthday. As you scroll through the slideshow above, you’ll see she shared seven different photos of her from recent times, some with her sisters and some just by herself.

No matter who else is in the pictures or where they were taken, Delaney’s beauty shines through. This is something her mother pointed out as well, writing “I am so proud of you….for so many reasons. But mostly just because of the beautiful person you are on the inside (and out).”

Speaking of Delaney, the eldest McBride girl marked a major turning point in her life when she graduated from massage therapy school in May 2018. The overjoyed graduate took photos with her family to celebrate the occasion.

Martina shared one photo that shows her, Delaney, Ava, and John, and took some time to gush about Delaney’s accomplishments. “This one has always had a bright light within her and she’s using it to help and heal others and make the world a better place,” she wrote.

The McBride girls don’t just attend country concerts…they go to all sorts of shows together!

In the summer of 2018 all three girls reunited to attend a Harry Styles concert as a family. Based on the bright smiles on their faces they were not only excited to see Harry perform, but were happy to be spending time with one another.

The second photo in the slideshow shows Delaney and Emma kissing their baby sister on the cheek…it’s pretty precious!

To celebrate Father’s Day in 2018, Martina shared another large slideshow of photos of her husband, John, with their girls. Some of the photos that appear in the slideshow are older, such as one midway through that shows John with two of the girls and Barney the Dinosaur.

But some of the other pictures are newer, and show how close the family is even though two of their girls have grown into adults. Be sure you scroll through the slideshow above to see all of the photos, past and present!

Martina expressed in the caption of this photo what we’re sure many of y’all have been thinking about Delaney, Emma, and Ava by now. “I love the way these three love each other,” she wrote.

The three girls always seem to be smiling when they’re together. Despite their age differences and the distance that sometimes separates them, their love is strong, and it looks like it will always be that way!

Knowing how good of a cook Martina is (she even has her own cooking show), it’s no surprise that many of the photos she shares of her girls show them seated at a table enjoying a meal together.

Martina took this picture of the three girls enjoying dinner with their father after Delaney and Emma came home for a visit. Once again, they all seemed thrilled to be spending time together…and enjoying some home-cooked food too!

Speaking of cooking, Martina had Delaney and Emma on the set of her cooking show, Martina’s Table. She was so happy to share another one of her passions with her girls, and wanted to share a snapshot of the three of them together on set.

“So great having the girls home for this episode…it was such a fun episode to shoot,” she wrote. We bet it was!

As she typically does on her daughters’ birthdays, Martina shared a slideshow of photos to celebrate Delaney’s 24th in December 2018.

The first photo shows her in more recent times in a cute snapshot with her mom, while all the photos that follow are throwbacks from her childhood. That may be the Delaney that you remember from the “Blessed” video…which is why it’s probably surprising to see all of her newer photos and see how much she has grown!

Learn more about Martina and John’s marriage, their daughters, and Martina’s choice to scale back her schedule for their sake by tuning in to the video below. Congratulations to her and John for raising such wonderful girls!