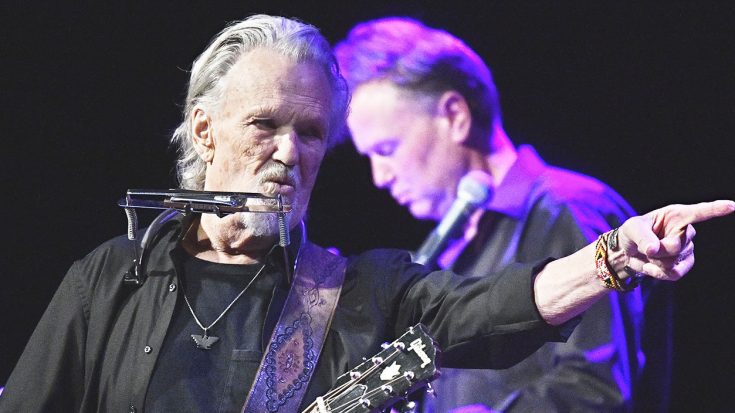 Kris Kristofferson is one of greatest songwriters of all time. He’s paved the way for so many singers after him, and helped cultivate a an entire sub-genre of country music.

He is an accomplished singer, songwriter, actor, and as you can tell from the title of this article, a complete badass.

Let’s count down the top 10 reasons why he is such a badass, even at 83 years old.

10. He Is The Father Of A WWE Wrestler

Kristofferson’s son, Jody Kristofferson is a WWE Wrestler who goes by the name Garrett Dylan.

He made his WWE debut in 2008 and is a force to be reckoned with, just like his pops!

9. He Is A Rhodes Scholar

The Rhodes Scholarship is a prestigious scholarship awarded to the 32 most deserving American college students.

According to their website, “Rhodes Scholars are chosen not only for their outstanding scholarly achievements, but for their character, commitment to others and to the common good, and for their potential for leadership in whatever domains their careers may lead.”

Apparently, whoever becomes a Rhodes Scholar can get a job pretty much anywhere and many have become Presidents or Prime Ministers.

Kristofferson was awarded with the scholarship in 1958 when he was studying literature at Oxford University.

Kris Kristofferson was a Rhodes Scholar & an Army captain. Did you know that? pic.twitter.com/DMx5pL63nw

8. He Was A Captain In The Army

Kristofferson came from a long line of veterans. He was under pressure from his family to follow in their footsteps, so he joined the Army.

He completed Ranger School and was stationed in Germany in the early 1960s. While he was there, he formed a band.

After he came back in 1965, he was offered a position at West Point to teach English literature, but turned it down to pursue a career in music. His family disowned him and they sadly never reconciled.

Kristofferson was awarded the “Veteran of the Year Award” in 2003 from the American Veterans Awards.

Did you know that Kris Kristofferson served as helicopter pilot in the Army. This weekend the Country Music Hall of Fame and Museum is honoring all veterans and active military with FREE admission and more. For more information visit our website: https://t.co/Ve0IPGuZ8f pic.twitter.com/BJJC8J37Ml

7. He Was A Helicopter Pilot

While Kristofferson was in the Army, he became a helicopter pilot.

After he left the Army to pursue music, he struggled as a songwriter, so he took up a job with the National Guard to help pay the bills.

After Johnny Cash refused to listen to his demos time and time again, Kristofferson took matters into his own hands during a training run with the National Guard.

He actually landed the helicopter on Cash’s front lawn in Hendersonville to give Cash a demo.

Ultimately it worked, because Cash later invited Kristofferson on stage at a music festival and the rest is history! Watch these drunk guys explain the story below.

After leaving the Army and working for the National Guard for some extra cash, it wasn’t enough to make ends meet.

He got a job as a janitor at the Columbia Records studios. He was actually in the studio when Bob Dylan recorded his album Blonde to Blonde!

Here he was, a Rhodes Scholar, Oxford graduate, and helicopter pilot, but he was taking out the trash at a recording studio!

But the job ultimately paid off.

5. He Was A Golden Gloves Boxer

Now that we know his son is a WWE wrestler, this doesn’t come as much of a surprise!

When Kristofferson attended Pomona College (before the Rhodes Scholarship that sent him to Oxford to study), he played on the football team and was a Golden Gloves boxer…because of course he was.

He told Rock Cellar Magazine once that his big boxing heroes were Rocky Graziano and Muhammad Ali, who eventually became a close friend.

Kris Kristofferson and his pal, the toughest guy he knew, @MuhammadAli @AliCenter pic.twitter.com/t0lnrVJiPI

4. He Is A Hall Of Fame Musician

In 2004, Kristofferson was inducted into the Country Music Hall of Fame.

His persistence of giving Johnny Cash that demo of “Sunday Mornin’ Comin’ Down” put him on the map and turned him into the great success he is today.

He also helped form the country music supergroup The Highwaymen with Johnny Cash, Willie Nelson and Waylon Jennings. All four men are known for growing the outlaw country movement.

His songs have been recorded by over 450 artists including Janis Joplin, Cash, Jerry Lee Lewis, Jennings, Ray Price, and so many more.

3. He Was A Great Friend Of Johnny Cash

1969 During an appearance at the Newport Folk Festival in Rhode Island, Johnny Cash brings an unknown Kris Kristofferson out of the audience to perform "Me And Bobby McGee." The next day, the local paper identifies the newcomer as "Chris Tofferson"https://t.co/4PbZjbUAd6 pic.twitter.com/WKx0FeMNk9

By now, y’all know about Johnny Cash helping Kristofferson at the beginning of his career.

Their business relationship turned into a friendship and over the years, created quite the bond.

“John was my hero before he was my friend, and anything with his name on it is really an honor in my eyes,” Kristofferson said.

They were great friends up until Cash’s death in 2003.

2. He Is An Award-Winning Actor

Kristofferson caught the acting bug and made his film debut in 1971.

According to IMDB, he has over 100 acting credits to his name. His most prominent movies were Blume In Love, Pat Garrett and Billy the Kid, Convoy, A Star Is Born, and Flashpoint.

He won a Golden Globe for his performance in A Star In Born opposite Barbra Streisand.

1. Overall Badass And Winner At Life

Think about all these facts about Kristofferson you just read.

He joined the Army, he was a helicopter pilot, he was awarded the most prestigious scholastic honor there is! He landed a helicopter on Johnny Cash’s lawn! He quit the Army to pursue his passion, and he became a living legend!

If all those things don’t point to badass, then we don’t know what does!