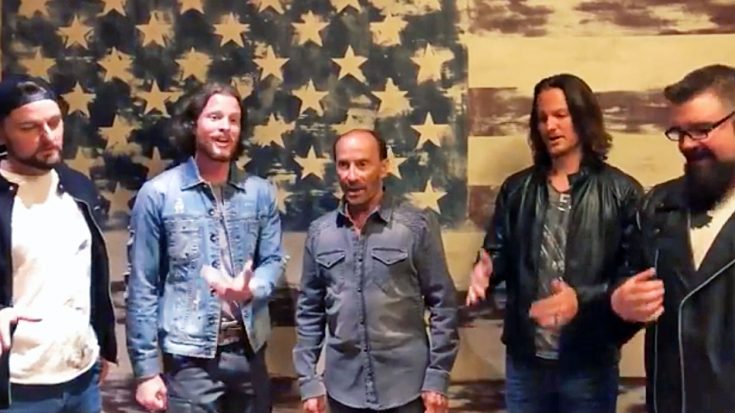 Where else could you run into Lee Greenwood and Home Free backstage putting on an impromptu performance of “God Bless The USA?”

Greenwood wrote and sang the patriotic tribute way back in 1983 because he wanted people in the US to be more united.

Thirty-five years later, the country singer and songwriter continues to get requests for what’s become his signature song and it’s been covered more times than an antique bed.

“God Bless The USA” won the CMA Award for song of the year in 1985. It also served as an anthem in 1990 and ’91 during the Gulf War and again in 2003 during the Iraqi invasion. Of course it was given heavy air play following 9/11. The patriotic tune continues to find new meaning and new life.

Greenwood always wanted to write a song about America. “God Bless America” fulfilled that wish for him.  His reason still holds true: “We just need to be more united.”

We had an amazing night performing at the @opry, and it was great bumping into and chatting with @sarabareilles! #AllAroundGreatEvening

Home Free At The Opry

In 2106, the a capella group Home Free released a cover of the anthem around the Fourth of July, complete with a video filmed in front of  Mt. Rushmore. The group described their effort as “their tribute to the brave men and women of the armed forces, past and presently serving”.

Greenwood always wanted to write a song about America. “God Bless America” fulfilled that wish for him. His reason still holds true: “We just need to be more united.”

Home Free debuted at the Grand Ole Opry in 2015. Last night, the all-vocalist group joined Lee Greenwood,  Larry Gatlin and the Gatlin Brothers and other country favorites reminding fans why country music really is the greatest.

Sit back and listen to this American classic and a tribute to our great nation.

What does Lee Greenwood’s song mean to you? Is there a particular memory you associate it with?