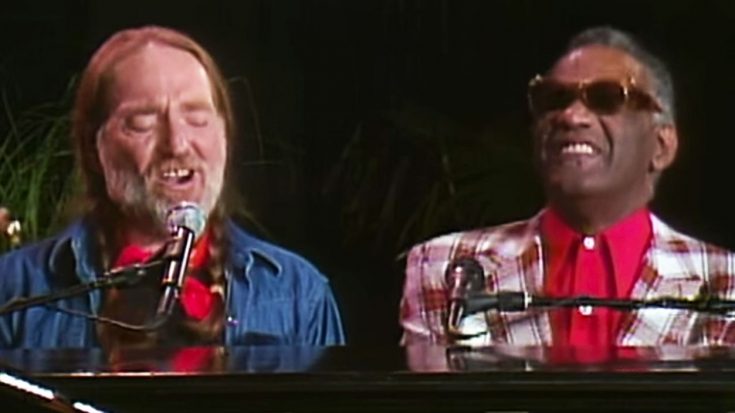 The day The Red Headed Stranger and The Genius collaborated, we’re sure there was magic in the studio.

Of course, we are talking about country music legend Willie Nelson and R&B icon Ray Charles.

Charles’ appreciation for country music was well-known among his cohorts. This proved to be true when he recorded the emotional ballad “Seven Spanish Angels” with Nelson in 1984. Their duet was included on Nelson’s album Half Nelson and hit number one shortly after its release.

They captured the tragedy of death, all the while singing about an incredible love to the soundtrack of a beautiful melody.

Your heart will break when Nelson sings, “She reached down and picked the gun up/That lay smokin’ in his hand/Said, ‘Father please forgive me/I can’t make it without my man’/And she knew the gun was empty/And she knew she couldn’t win/But her final prayer was answered/When the rifles fired again.”

The song became Charles’ most successful song out of a total of a whopping eight country hits. As an R&B/soul singer, that’s pretty impressive! But then again, he is Ray Charles.

“I was born with music inside me. Like my heart. It was a necessity for me – like food or water.” – Ray Charles https://t.co/GMoMxcNM1Y

The two icons sat behind a piano together and played “Seven Spanish Angels” for their adoring crowd just a few weeks after recording it. While they may, at first, seem like an unconventional pairing, their voices sound absolutely incredible together and will prove your thinking wrong almost immediately.

The Grand Ole Opry held a Ray Charles tribute night on October 8th for a television special that aired on PBS in February 2019. Nelson’s son, Lukas, performed this incredible song in honor of his father and Charles.

Watch the legends’ bone-chilling performance below.