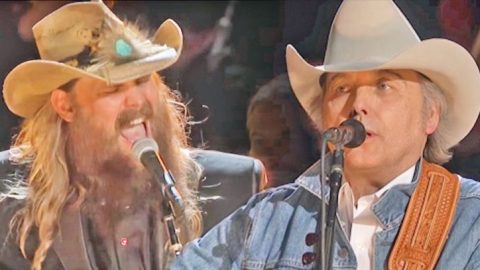 The 50th Annual CMA Awards celebrated the history of country music, bringing out the best tributes from country singers of yesterday and today.

Throughout the night, modern artists teamed up with classic singers to sing classic songs, and when it was time for Chris Stapleton and Dwight Yoakam to perform, they did not disappoint.

Stapleton started off the song with his signature gritty vocals and spine-tingling harmonies from his wife, Morgane. Yoakam took the lead in the second half and Stapleton joined him for the final chorus.

The audience was loving every second of their Willie Nelson and Ray Charles tribute. The camera panned to legend Ricky Skaggs nodding his head to the beat in enjoyment, and to Brooks and Yearwood, who were cheering the two singers on.

This performance was pure country which is why we aren’t surprised that the CMAs teamed up this cowboy hat-wearing duo. You expect nothing but the best from each of these singers and boy, did they deliver.

Their incredible performance earned them a well-deserved standing ovation from their peers. Watch it below.