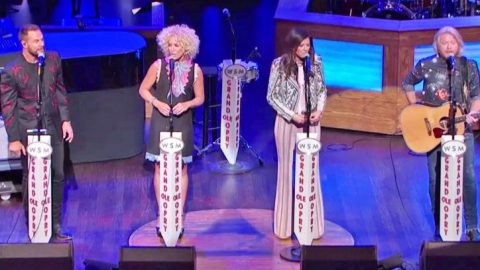 Country quartet Little Big Town took the stage of the Grand Ole Opry for a stunning cover of legend Dolly Parton’s “Jolene” back in June of 2017.

“How ’bout y’all sing along with us on this one?’ the country group asks the audience before diving into a bone-chilling cover of the ballad that tells tale of all consuming. The group performs the song without any music and harmonize together in a powerful manner that renders the audience silent.

“Your beauty is beyond compare,” they sing together captivating the crowd with every word. “With flaming locks of auburn hair, with ivory skin and eyes of emerald green.”

“Jolene” weaves the story of a woman confronting a perfectly beautiful woman who she believes is out to steal her love. The woman fears she cannot compete with the stunning beauty of Jolene and begs her throughout the song, “Please don’t take my man…please don’t take him just because you can.”

Parton released the song in late 1973 and it became her second solo No.1 single on the country charts. “Jolene” didn’t only reach massive success in the United States but also dipped into the charts internationally reaching No.1 in Canada, No.8 in Ireland, and No.16 in Sweden.

You can watch Little Big Town’s powerful rendition of Parton’s classic in the video below and be sure to let us know how you think they did in the comments below!