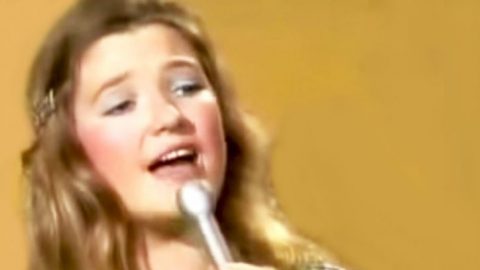 How Tanya Earned Her First #1

At the young age of 13, Tanya Tucker captivated country music with her breakout song, “Delta Dawn.” Those who tuned in and heard Tucker’s song playing on the radio were instantly drawn to her powerful, raspy voice.

Although “Delta Dawn” is now considered as Tucker’s signature song, it wasn’t a number one hit.

Tucker’s first number one came in the following year, with the Dallas Frazier and Earl Montgomery-penned “What’s Your Mama’s Name.”

A Sad Story Set To Song

The song tells the story of a man who wanders into Memphis one day. He comes across a little green-eyed girl and frantically questions her about her mother’s name.

It comes to a tragic end, when the man dies after becoming a drunk and having a hard time in Memphis. After his death, people found a note in his pocket that said he had a little girl with green eyes, revealing all along that he was simply trying to find his daughter.

Tucker’s naturally rough tone was the perfect fit for the heartbreaking tune.

The Catapult To Success

It seems that listeners agreed, because “What’s Your Mama’s Name” became Tucker’s first number one hit of her career.

The song was so popular at the time that it also made a showing on the Billboard pop charts. Tucker’s two following singles, “Blood Red and Goin’ Down” and “Would You Lay with me (In a Field of Stone),” both hit number one as well.

Those songs were just the first of many number ones to come. Tucker now has ten total number ones, and dozens of Top 10 and Top 40 hits.

A Trip Back In Time

While she was still a teenager in 1973, Tucker went on a television show to perform “What’s Your Mama’s Name.” Footage from that performance has resurfaced online, and watching it is like cracking open a time capsule.

Wearing a black and white checkered dress with yellow accents, Tucker had everyone hooked to her performance from the first word. Tucker made it obvious through this performance that she was a born entertainer. As a teenager, she sang with more conviction than some people twice her age.

Watching this performance, it’s no wonder why “What’s Your Mama’s Name” became Tucker’s first number one hit. It’s also no wonder why Tucker is now regarded as a country music icon.

Take a trip back in time with us by tuning in to the video below to watch a teenage Tucker sing “What’s Your Mama’s Name.” We guarantee that you’ll be blown away by what you see and hear!