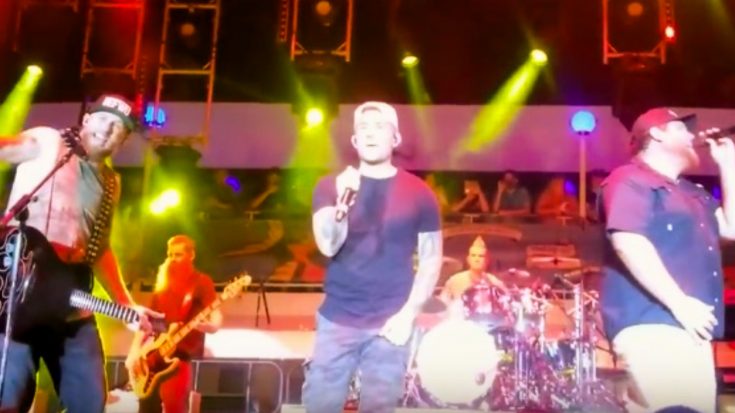 Few songs can make an audience sing as loud as Lynyrd Skynyrd‘s “Simple Man.” The Southern rockers debuted the track, which is undoubtedly one of their most iconic, in 1973.

Due to its popularity, “Simple Man” is one of Skynyrd’s most frequently covered songs. The most famous rendition is by the rock band Shinedown, who recorded the song for their 2003 album, Leave a Whisper.

But there are far more versions out there. Country stars are no strangers to covering the song, with names as big as Charlie Daniels and Hank Williams Jr. offering their takes on the tune.

Another country artist known for covering the song is Brantley Gilbert. In fact, he got the chance to perform “Simple Man” alongside Skynyrd themselves as part of the hit CMT series Crossroads.

That was back in 2015, and Gilbert is still singing “Simple Man” today. He brought the famous Skynyrd song back as part of his set during his BG Cruise in October 2018.

Just like on Crossroads, he had a little help singing the track, though not from Skynyrd. Instead, he enlisted a couple of his fellow country stars to help him out this time.

The first artist to join Gilbert on stage was Michael Ray. Ray scored his first number one hit with his debut single “Kiss You in the Morning.”

Prior to teaming up with Gilbert at the BG Cruise, Ray also performed a solo rendition of “Simple Man” during a show back in 2012.

Gilbert and Ray already had the cruise crowd hooked on their performance, so the addition of a third artist made things even better.

Add In The Third Artist

That artist was none other than Luke Combs, the powerhouse vocalist behind some of today’s hottest country hits, including “One Number Away” and “Hurricane.”

Together, the three artists delivered a performance that will leave you covered in goosebumps. That’s the best description we can use to describe how epic it was.

And nothing beats the sound of hearing that crowd sing along at the top of their lungs. It just goes to show how universal Skynyrd’s music is and always will be.

Prepare to be blown away when you watch this group of country stars belt it out to “Simple Man” in the video below. They need to team up for more performances now!