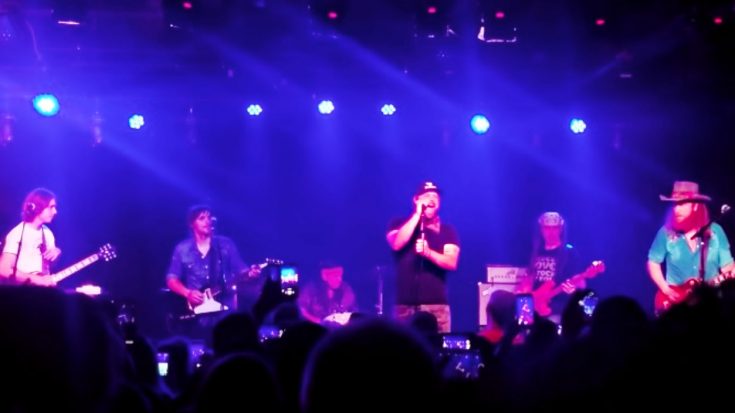 Few artists have ever been able to achieve the same level of crossover appeal that Lynyrd Skynyrd has enjoyed for decades. While the group is labeled as being part of the Southern rock genre, their influence is felt in many others, including country.

In July 2018 Nashville, a whole host of country stars who grew up on Skynyrd’s music chose to honor the Rock and Roll Hall of Famers by performing an entire show’s worth of their songs. Fans were treated to stellar covers of some of Skynyrd’s greatest hits, including “Tuesday’s Gone,” “The Ballad of Curtis Loew,” and “Free Bird.”

Of course, no Skynyrd tribute concert would be complete without “Simple Man.”

The Simple History Behind “Simple Man”

One of the first songs Skynyrd ever released, “Simple Man” was included on the band’s debut album (Pronounced ‘Lĕh-‘nérd ‘Skin-‘nérd). Written by late lead singer Ronnie Van Zant and guitarist Gary Rossington, the song is perhaps one of the most emotional and meaningful in Skynyrd’s entire collection.

“Simple Man” has been used countless times in popular culture, and has been covered even more times than that. One of the most high-profile covers was performed by Skynyrd’s fellow Southern rockers Gov’t Mule during a 2014 concert special held in Skynyrd’s honor.

The special, called One More for the Fans, also featured performances from some major country music stars, including Trace Adkins, Charlie Daniels, and Jamey Johnson.

Another country star who performed that night was Randy Houser, who delivered a powerhouse performance of a lesser-known Skynyrd track, “Whiskey Rock-A-Roller.”

Randy’s performance was one of the standouts from the One More from the Fans special. When you watch his performance above, its easy to see why.

The One More from the Fans special wasn’t the first time that Houser ever covered Skynyrd’s music. In fact, way back in 2010 he recorded a cover of “Simple Man” for a Skynyrd tribute album exclusively featuring contributions from country stars.

Over the years, Houser has revisited “Simple Man” many times, most recently at the Monday night Nashville show mentioned earlier. Houser was joined on the song by CMA and ACM Duo of the Year Brothers Osborne and the critically acclaimed singer Charlie Worsham.

Considering that Houser had wealth of past experience covering the song, he was given the honor of singing lead. It was a fitting role for him to fill, since he has perfected the art of carrying the song’s emotions in his powerful, booming voice.

With so much talent on one stage, it was inevitable that this “Simple Man” tribute was going to be a show-stopper. Prepare to be in awe when you watch it below.

Lynyrd Skynyrd is hitting the road one last time and coming to a city near you – don’t miss your chance to say goodbye! Tickets WILL sell out fast for this legendary final tour, get yours now by clicking here!