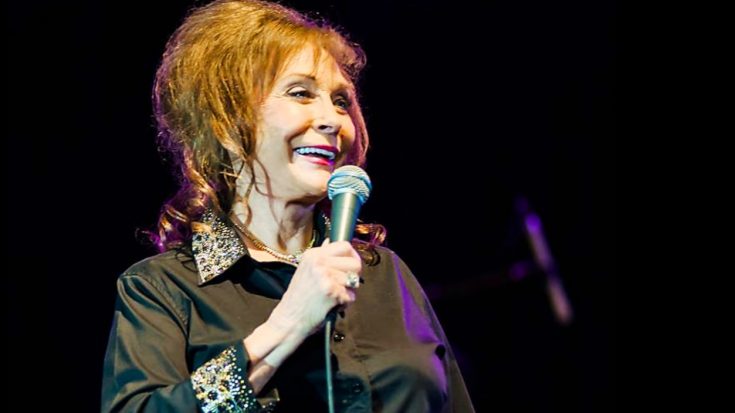 The legendary singer/songwriter was back and working hard just a year after several serious medical problems caused many problems in her life.

Loretta Lynn is not one to let things like a stroke or broken hip keep her away from doing what she loves! She’s always been one of the fiercest and strongest women in country music – and her resilience is an inspiration to many.

In May 2017, she had a debilitating stroke that had friends, family, and fans very concerned for her health. She then took several months to recover in a specialized facility – and returned with great vigor and excitement later that fall.

Just under six months after making a masterful comeback from the stroke, she suffered a fall that left her with a broken hip just a few days before sister Crystal Gayle’s birthday.

Now, it appears that Loretta Lynn is back and better than ever! In a never-before-seen photo, Loretta is pictured posing for a music video shoot at her famous Hurricane Mills Ranch.

“At the ranch yesterday filming for a music video for my new album called Wouldn’t It Be Great,” she writes alongside the photo of a camera preview screen.

The camera is filming Loretta as she sits on the stone staircase and beams eagerly at the camera while musicians play next to her.

We are so glad to see her back at work and doing what she loves to do! Can’t wait for this new album.

See the full photo below and watch her unforgettable performance of “Coal Miner’s Daughter” in the video.

At the Ranch yesterday filming for a music video for my new album called Wouldn't It Be GreatWe'll have more updates for you all soon!love,Loretta Lynn