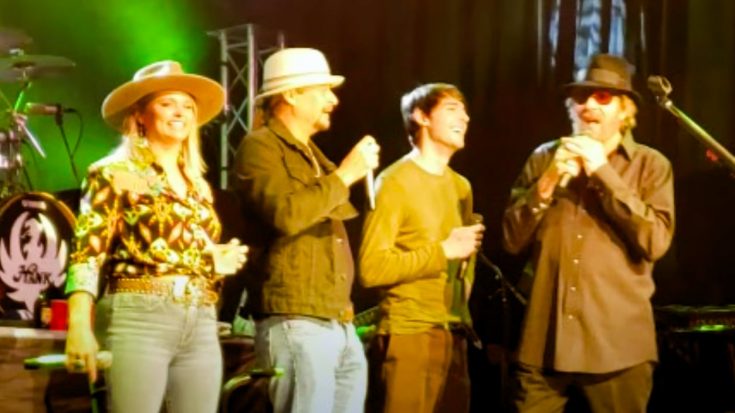 Hank Williams Jr. joined a couple of his “Rowdy Friends” to deliver one unforgettable collaboration!

The day before Easter in 2021, Hank was the headliner at the famous Texas venue Billy Bob’s Texas. During the concert, he invited some of his friends to his side to sing his iconic song, “Family Tradition.”

Who were the superstar singers Hank welcomed to the stage? They were none other than Miranda Lambert and Kid Rock!

The trio was also joined by Hank’s son, Sam Williams, who is a singer too. Together, they burst into a fun-lovin’ rendition of “Family Tradition.”

“Family Tradition” is a song that fans always love to hear Hank sing in person. It’s made all the more entertaining when he sings it with friends like Miranda and Kid Rock.

Whenever Hank sings “Family Tradition” live, he likes to get the crowd involved in his performance. He will pause and give the audience the chance to respond to a line in a call and response format.

That’s exactly what Hank and his friends did during their Billy Bob’s performance. It seems like everyone was having a grand old time!

Tune in to the clip below to watch Hank, Kid Rock, and Miranda sing “Family Tradition.”

Make sure you watch the video all the way through, because they also perform Kris Kristofferson‘s “If You Don’t Like Hank Williams.” Hank went on to record the song himself for his 1980 album Habits Old and New.

We love it whenever multiple artists get together to sing and have a good time like this!