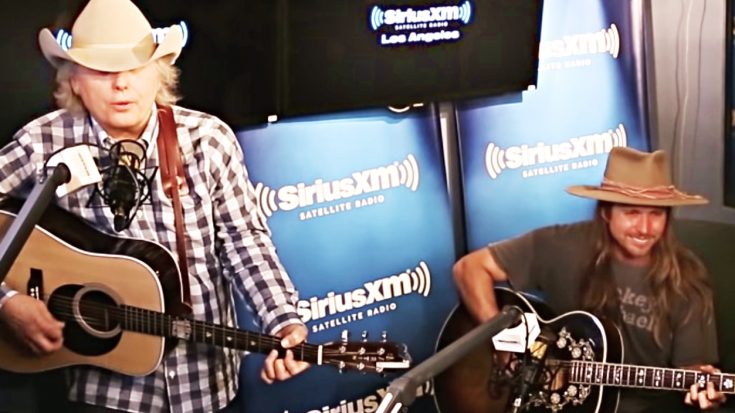 During a 2018 SiriusXM episode of Dwight Yoakam and the Bakersfield Beat – Yoakam sat down with country music royalty, Lukas Nelson. The intimate jam session got an upbeat overhaul when the singers decided to play Willie Nelson‘s  “Me and Paul.”

Willie wrote the classic song and released it in 1971. The song highlights all of the mishaps he had while traveling with his drummer, Paul English. The two were obviously very close as the song goes into detail about no matter where they traveled or what happened, these two guys stuck together and learned from everything that happened to them.

According to certain surrounding associates, English was not always the easiest to get along with but Nelson kept him close by for his own reasons. He cared so much about the drummer, he even wrote a song for him.

Nelson recorded it live and told the audience about his friend and partner in crime saying, “Here’s a song that I wrote many years ago about me and a guy that plays drums in our group, a guy named ‘Paul English’ – we call the song ‘Me and Paul’.“

Now, 47 years after it was recorded, Willie Nelson’s son, Lukas is caring on the memory of the good times (and the bad) that his father had with the infamous drummer. And he is doing it with style!

Me and Dad, in Luck , #tx Nice photo by @caryaudio

With just a few acoustic guitars and a mandolin, Lukas Nelson and Yoakam stayed true to the song. The funky tune with their classic twangy voices is something every country music fan needs to hear.

Check out the full video below and be sure to look for Dwight Yoakam and the Bakersfield Beat on SiriusXM Channel 349.