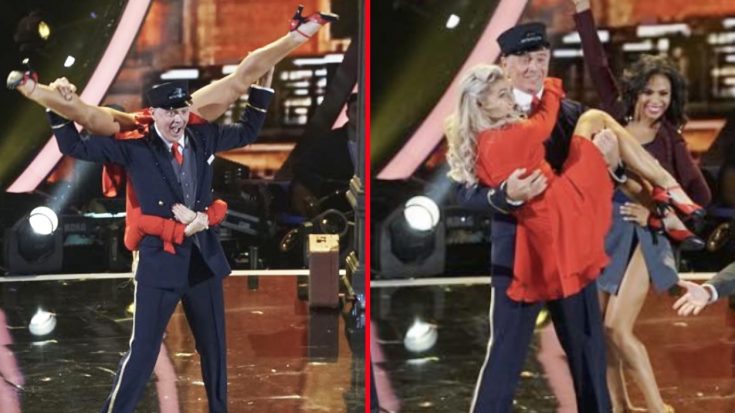 Fresh off a very successful Dancing With The Stars debut, Dukes of Hazzard star John Schneider hoped to continue to impress the judges with his “natural elegance and charm,” as judge Carrie Ann Inaba put it in episode one.

Schneider and his professional partner, Emma Slater, received enough judges points and votes from America to keep them safe from elimination during week one. Comedian Nikki Glaser wasn’t so lucky and was the first celebrity sent home.

During the second week of competition, DWTS hosted its very first themed episode of the sesason – New York Night! All the dances had a New York theme to it, whether it be Broadway, the ballet, tourism, subways, street performers, or even Frank Sinatra.

Schneider and Slater’s dance style was the Charleston, and they performed it to the tune of Sammy Davis Jr.’s “New York’s My Home.” Their dance was set in a 1940s New York train station, where the two were showing off their Charleston steps.

“They say there’s always magic in the air…” ? The New York groove digs in to #DWTS tonight and the festivities start now! Retweet if you’re watching! ? pic.twitter.com/TOXvuDKPBn

The couple’s fun dance incorporated some impressive high kicks, which judge Bruno Tonioli could not get enough of! Schneider really got into his character and put on one heck of a performance.

At 58 years old, he is the oldest contestant this season, but it certainly doesn’t show! Schneider and Slater earned a respectable 23/30 as their score, putting them at the middle of the pack. We will find out their fate on Tuesday night’s episode (Oct 2).

Watch their full Charleston routine in the video below.