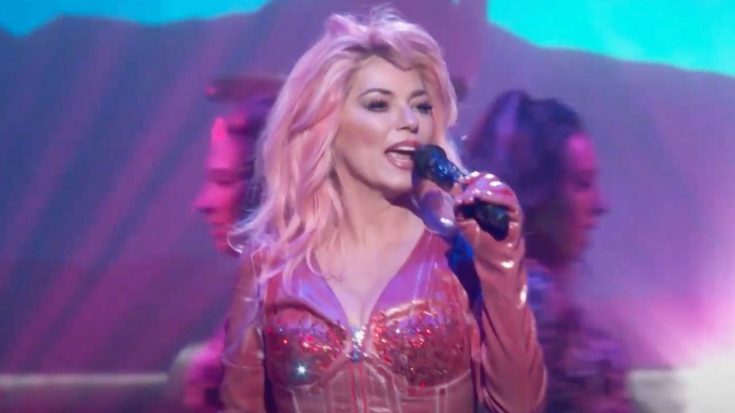 On Tuesday night (Dec. 7), Shania Twain was honored at the People’s Choice Awards with the Icon Award. To celebrate the occasion, she rocked pink hair and some familiar threads! On the red carpet, she channelled her “That Don’t Impress Me Much” video with a hooded cheetah print look.

One word for Shania Twain at the #PCAs : iconic pic.twitter.com/9NSq7Ja9WD

During the show, Shania took the stage to perform a medley of her hits. The performance came with outfit changes, dancers and plenty of energy. Celebrities from Carrie Underwood, Kelly Clarkson, the Kardashians and Ryan Reynolds were among those seen in the crowd enjoying Twain’s performance.

She kicked the medley off with “Any Man of Mine,” where she sang in a fiery circle! Then, she moved on to “That Don’t Impress Me Much,” where her backup dancers were rocking leopard print body suits. That song is also where she made the big lyric change!

This Ryan Reynolds shoutout really was something special. #PCAs pic.twitter.com/STQtnI4YQI

Reynolds shared the video on his Instagram story and wrote, “This may be the best thing that’s ever happened to me.”

On Twitter, Reynolds wrote, “I can’t think of a more iconic, smart and beautiful person to not impress all that much. Thank you for an amazing night!”

I can’t think of a more iconic, smart and beautiful person to not impress all that much. Thank you for an amazing night, @ShaniaTwain ❤️ https://t.co/od2KsUoo2s

She followed up “That Don’t Impress Me Much” with her latest single, “Waking Up Dreaming.” She closed out the medley and got everyone on their feet with a rowdy rendition of “Man! I Feel Like A Woman.”

Watch her full performance below!