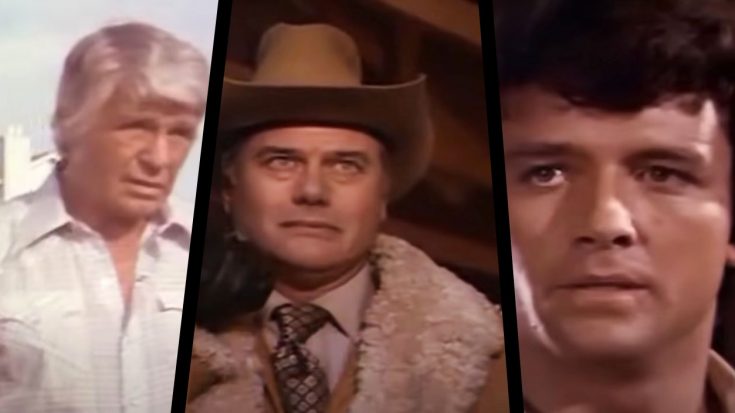 Dallas was an American prime time television soap opera that aired on CBS from April 2, 1978, to May 3, 1991. The show follows the Ewing family and its massive oil empire. The family patriarch, Jock, has three sons. The eldest is J.R., the relentless CEO of Ewing Oil, and the two younger sons, Bobby, and Gary.

The show was a massive hit and while many people to this day go back and re-watch it, there are some less-known facts about the show that many find intriguing. Below are 7 interesting facts about Dallas.

1. Hagman Modeled His Character J.R. After A Real-Life Oil Tycoon.

Hagman grew up in Texas and said he used to dig ditches and build swimming pools for an oil man with four sons in Weatherford, Texas. He told Ultimate Dallas it was destroying his soul and it pushed him into acting. “I figured that life was not for me so I became an actor … I learned not so much about the oil business but about oil families, and when [the oil man] died, there was kind of a war to see who would take over the business and one of the sons won, and I modeled my character after that son.”

2. J.R was never meant to be the starring character!

As strange as it may sound, Larry Hagman’s J.R. Ewing was never meant to the main character in Dallas. The star of the show was actually meant to be Pam, played by Victoria Principal. However, Hagman’s portrayal of J.R was so good that the producers made him the star of the show instead!

3. Hagman Believes The Show Led To The Fall Of Communism.

The show was so popular that it had a global audience. In Romania, it was forbidden until Romanian president Nicolae Ceaușescu finally allowed the show to air. He was tricked into believing it was anti-capitalist, therefore safe to show Romanians. “I think we were directly or indirectly responsible for the fall of the [Soviet] empire,” Hagman told the Associated Press. “They would see the wealthy Ewings and say, ‘Hey, we don’t have all this stuff.’ I think it was good old-fashioned greed that got them to question their authority.”

In 1989, Ceaușescu and his wife were assassinated, and after the dictator’s death, the show’s previously censored scenes were edited back in and aired.

4. The Show Inspired Hank Williams Jr. To Write The Song, “This Ain’t Dallas.”

This ain’t Dallas and this ain’t Dynasty
This is a real-life two job working family
And I ain’t J.R., you ain’t Suellen
We’re just a man and a woman holding things together

5. J.R. Appeared In Every Single Episode.

Larry Hagman as J.R, appeared in all 357 episodes of ‘Dallas’ and was the only actor to do so.

6. Mother and son were slightly closer in age than they should have been!

Barbara Bel Geddes played Larry Hagman’s mother in the show, yet the two actors were only 9 years apart in age, making that relationship very difficult, yet they played the parts perfectly and you’d never have known!

7. The Queen Pressed Larry Hagman For The Identity Of J.R.’s Shooter.

Season 3 ended with the cliffhanger of J.R. being shot by an unknown person. Over 83 million Americans who tuned in to watch the Season 4 premiere but they weren’t the only ones dying to know what happened. According to TV Insider,  Britain’s Queen Mother asked Larry Hagman if he could reveal the identity of J.R.’s shooter. Interestingly, CBS had the entire cast film scenes of them shooting J.R. in order to keep the shooters identity a secret.

Hear more of the cliffhanger and Season 4 premiere below.