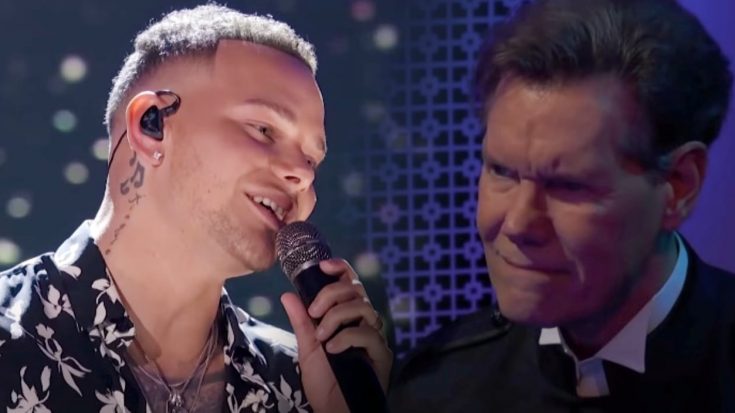 Randy Travis was honored as the “Artist of a Lifetime” during the 2021 CMT Artists of the Year celebration. CMT explained why it felt Travis was deserving of such recognition:

“Randy Travis is CMT’s Artist of a Lifetime because songs like 1987’s ‘Forever And Ever, Amen,’ 2002’s ‘Three Wooden Crosses,’ and so many more are part of what are essentially, some of the genre’s modern cornerstone songs.”

Travis was grateful to be recognized in such a way. He shared a post about the Artists of the Year event on social media, and wrote, “What a wonderful night. Truly honored. Thank you @cmt and all the honorees…”

One of the CMT Artists of the Year was Kane Brown. Even though he was also being honored that night, Brown was focused on paying tribute to Travis.

Brown delivered a performance of Travis’ emotional song, “Three Wooden Crosses.” It’s a track that Brown has covered many times through the years, and he always does so with great respect.

Back in 2016, Brown was singing “Three Wooden Crosses” on a radio show when Travis walked out and surprised him mid-performance. His reaction was priceless.

Since Brown has a long history of honoring Travis with “Three Wooden Crosses,” it makes sense why he chose to perform the song in his honor during the CMT Artists of the Year event. His performance was touching as always, and viewers loved it.

“Randy was my most favorite country singer Kane did a beautiful job singing his song,” Twitter user Annette Phillips said about Brown’s performance.

“Forever one of my favorite covers Kane Brown does!” wrote Twitter user Charlene, who has clearly enjoyed Brown’s past performances of the song.

Head below to watch Brown sing “Three Wooden Crosses” during the 2021 CMT Artists of the Year event.

The camera cut several times to show Travis, who was smiling the whole time. You can tell he was proud of Brown’s performance!