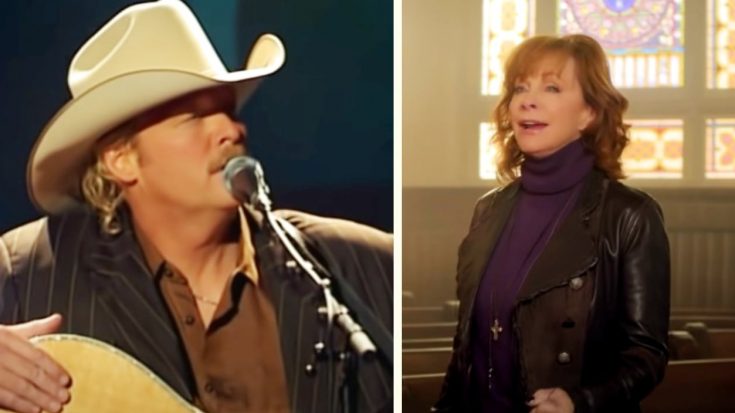 Country artists will often sing about their faith in their songs.

Carrie Underwood does so in tunes such as “Something in the Water” and “Jesus, Take the Wheel.” Blake Shelton has faith-based songs in his catalog such as “Bible Verses” and “Savior’s Shadow.” And who could ever forget Randy Travis‘ “Three Wooden Crosses” or Brad Paisley and Dolly Parton‘s “When I Get Where I’m Going”?

Christian/gospel music and country music have always intertwined. Because of this, many country artists feel moved to record entire gospel records. Below, we’ve listed nine of these records, some of which are lesser known than others. All of them contain touching songs about faith, hope, redemption, and love.

Charley Pride released not one, but two gospel records over the course of his career. The first was 1971’s Did You Think to Pray and the second was 1976’s Sunday Morning with Charley Pride.

In 1971, Pride won a Grammy Award for Best Gospel Performance (other than soul gospel) for his performance of the original song “Let Me Live.”

Reba McEntire released her first gospel record in 2017, titled Sing It Now: Songs of Faith and Hope. The album contains two discs. One disc features McEntire’s versions of traditional hymns. The second disc is completely comprised of original songs, including “Back to God.”

Sing it Now won the GMA Dove Award for Bluegrass/Country/Roots Album of the Year and won the Grammy Award for Best Roots Gospel Album.

McEntire released a second gospel record, My Chains Are Gone, in 2022.

Randy Travis has released six gospel albums over the course of his career. His first was 2000’s Inspirational Journey and his most recent was 2020’s Precious Memories (Worship & Faith).

Travis has recorded many of the world’s most beloved hymns and gospel standards, including “Amazing Grace,” “I’ll Fly Away,” and “Open the Eyes of My Heart.”

Many of Travis’ gospel albums have won Grammy and Dove Awards.

George Jones famously released The Gospel Collection in 2003. The album meant a lot to him, since he grew up singing songs in church with his mother, Clara.

The Gospel Collection contained Jones’ renditions of classic tunes such as “In the Garden,” “The Old Rugged Cross,” and “If I Could Hear My Mother Pray Again.”

Jones had previously released another gospel record, We Love To Sing About Jesus, with his then-wife Tammy Wynette in 1972.

The first Precious Memories album reached the #1 spot on both the Top Country Albums chart and the Top Christian Albums chart.

Both albums contain traditional gospel songs such as “When the Roll is Called Up Yonder,” “What a Friend We Have in Jesus,” and “Blessed Assurance.”

The newest gospel record on this list comes from Carrie Underwood. After years of singing songs about faith, Underwood released her first-ever gospel album in 2021.

Titled My Savior, the album contains thirteen covers of traditional songs. One of those songs is “How Great Thou Art,” which Underwood is famous for previously performing alongside Vince Gill in 2011. Another track is a duet between Underwood and legendary gospel artist CeCe Winans on “Great Is Thy Faithfulness.”

My Savior has been nominated in the Best Roots Gospel album category at the 2022 Grammy Awards.

Josh Turner is another artist who has been singing about his faith for a long time. He finally released his first gospel album, I Serve a Savior, in 2018.

I Serve a Savior features collaborations with Sonya Isaacs on “I Saw the Light” and “How Great Thou Art.” Turner’s wife and four sons sing with him on an original tune called “The River (Of Happiness), which was written by his wife and their eldest son.

Merle Haggard released his fair share of gospel records. In 1971, he and his band The Strangers released a live, double gospel album titled The Land of Many Churches. The album contained a total of 24 tracks.

In 1981, Haggard released another gospel record, Songs for the Mama That Tried. This album referenced his hit song “Mama Tried,” and was dedicated to his mother, Flossie. She posed with him for the cover photo that appears on the album.

Dolly Parton has recorded a wealth of gospel and Christian music throughout her career. Not all of it appears on an album, but some of it does.

In 1999, Parton released an exclusive gospel record titled Precious Memories. The album was only sold at Parton’s Dollywood theme park in Pigeon Forge, Tennessee. All proceeds from the album went to the Dollywood Foundation, which supports Parton’s Imagination Library program.

Parton is also the only artist featured in this list to have been inducted into the Gospel Music Hall of Fame.

Which one of these gospel records is your favorite?