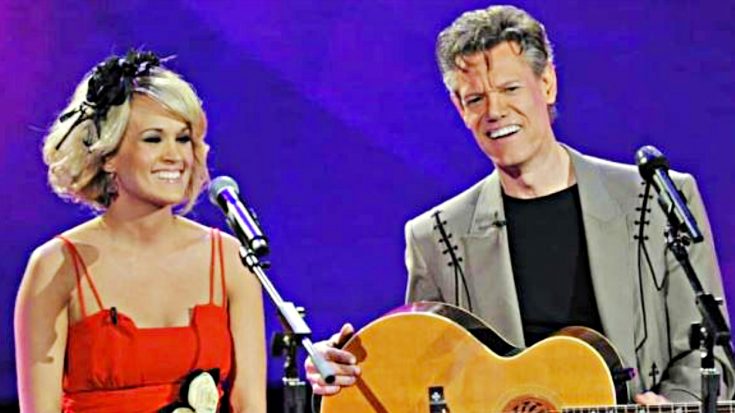 Carrie Underwood and Randy Travis graced the American Idol stage in 2009 for Grand Ole Opry week, to perform Randy Travis’ iconic song “I Told You So.”

“I Told You So” was written and originally recorded by Randy Travis and appeared on his 1987 album Always and Forever. The song was released in March 1988 and topped the Billboard Country Singles charts at number one that June. At the 1989 American Music Awards, the song was awarded the Country Single of the Year.

Travis originally recorded the song five years earlier on his 1983 album Live at the Nashville Palace under his stage name “Randy Ray.” The song was a hit locally and became one of his most requested songs at the club.

A Country Classic Given New Life

In 2007, American Idol winner Carrie Underwood recorded the song and put it on her Carnival Ride album. She released her version two years later in February 2009 and then re-recorded and re-released it in March 2009 as a duet with Travis. Their duet topped the U.S. Country Charts at number two that same year.

Fans across multiple genres were captivated by Underwood and Travis’ duet together. The duo received the highest praise when awarded the Best Country Collaboration with Vocals award at the 2010 Grammys.

Randy and Carrie took the American Idol stage to perform the iconic song together. Carrie looked stunning in a spaghetti strap red dress and black floral piece in her short blonde hair while Randy looked as dapper as ever donning a tan suit jacket and wearing all-black with his guitar in his lap ready to play. Sitting side-by-side, the melody starts and Carrie’s incredibly smooth vocals fill the room as she sings the first verse and chorus. Randy joins in at the second verse, and they continue to harmonize together throughout the song.

Such a spine-tingling performance! Watch it in full below.