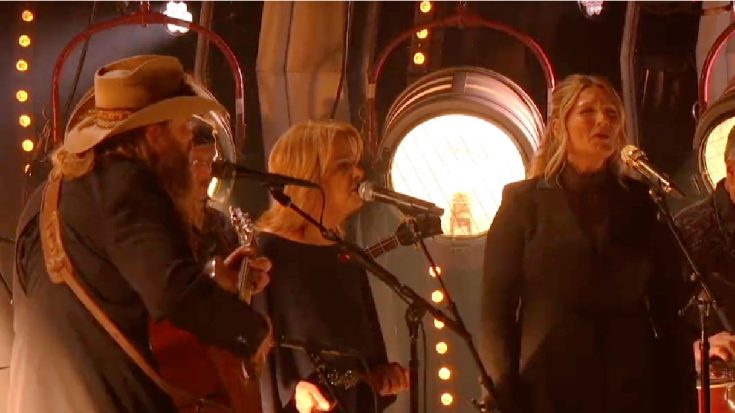 Fans of ’90s country music were in heaven Wednesday night when Patty Loveless, the CMA’s 1996 Female Vocalist of the Year, took the stage to perform with Chris Stapleton.

Patty Loveless was one of the greatest female artists of the ’90s with her recognizable sound, influenced by her Kentucky bluegrass upbringing. “Blame It On Your Heart,” “You Don’t Even Know Who I Am,” and “How Can I Help You Say Goodbye” are just a few of the songs that made Loveless one of the best voices of the genre.

Patty mostly retired from performing in 2009, but has made guest appearances on other artists albums, including “Dear Diamond” from Miranda Lambert’s 2010 album Four the Record.

In a surprise appearance earlier this year, Loveless joined Chris Stapleton during Kentucky Rising, a benefit concert for victims of the Kentucky floods. Stapleton and his wife Morgane sang backup for Patty as she performed her 1995 single “You Don’t Even Know Who I Am.”

According to Loveless, the collaboration came together at the last minute when Chris Stapleton texted and asked if she would give him a call.

“I was sitting down at the fish pond with my husband, and Chris said, ‘Hey, can you come and do this with us?'” Patty told the crowd. “It’s been awhile. I can’t say no to Chris Stapleton, that’s for sure.”

Stapleton and Loveless teamed up once again Wednesday night for the CMA Awards where they sang “You’ll Never Leave Harlan Alive.” The song was written by Darrell Scott who first released it as a single in 1997. Numerous artists have recorded it since, including Brad Paisley, Kathy Mattea and Montgomery Gentry. But, it was Patty Loveless’ 2001 rendition that is considered to be the best.

In an interview with Kentucky Country Music, Darrell Scott recalled writing the poignant tune while searching for information about his great-grandfather. While visiting the Harlan County [Kentucky] Public Library, going through historical records, and visiting cemeteries where he knew his family lived, the song started taking shape in his mind.

“Darrell noticed how the sun came up about ten in the morning, and down around three in the day.  Soon he saw inscribed on a gravestone the words ‘you’ll never leave Harlan alive.'” the website says.

“I didn’t go there to write the song.  I went there to find out what happened to my great grandfather,” Darrell told the publication.

But, the things he was while in Harlan County were imprinted in his memory and soon became a song that would become a heartbreaking tune about Kentucky coal miners.

Patty Loveless and Chris Stapleton’s CMA Awards performance wasn’t only about Loveless’ return to the stage, but also a tribute to those affected by epic flooding in their home state and all who have been struck by tragedy this year.

As Loveless sang the haunting lyrics, the crowd rose to their feet and sang along. Watch Patty Loveless and Chris Stapleton perform “You’ll Never Leave Harlan Alive” in the clip below.

The #CMAawards collaboration we never knew we needed 🙌 Give it up for @ChrisStapleton and Patty Loveless! pic.twitter.com/NUkc7VTAWZ