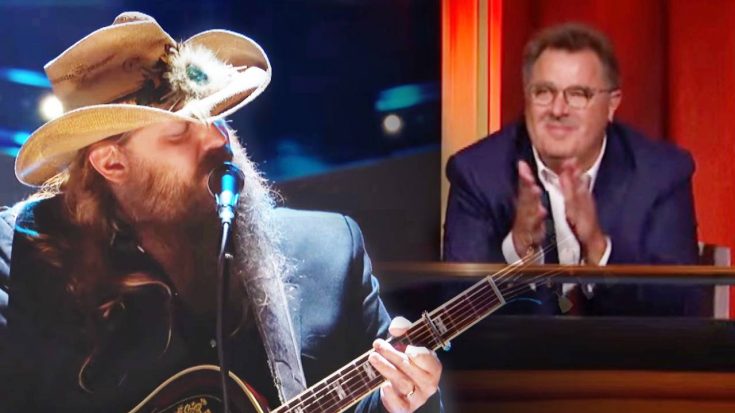 CMT is airing a CMT Giants special honoring Vince Gill. The event actually took place on September 12, but will air on Friday (September 16).

While the performances won’t air until Friday evening, CMT released a sneak peek of Chris Stapleton’s tribute. He performed Gill’s 1994 hit song “Whenever You Come Around.”

Before beginning the song, Stapleton said a few words about the man who he considers a hero.

“I think the greatest impact you’ve had on my besides the obvious things about your music. I moved here wanting to be you,” he said. “You’ve had the courage to encourage me. You always had time to come watch me play or invite me on a songwriting round when I had no business being in it. An0d it’s really made a difference, it’s made a difference for me and I really appreciate that. I love you from the bottom of my heart.”

Gill can be seen smiling through Stapleton’s entire speech before the “Broken Halos” singer started his tribute, which gave us chills immediately. Stapleton’s voice is perfect for this song and the only question we have is, when can they record a duet version together??

Watch Stapleton ‘s performance below and make sure to tune into CMT tonight for all the incredible tributes to Vince Gill!