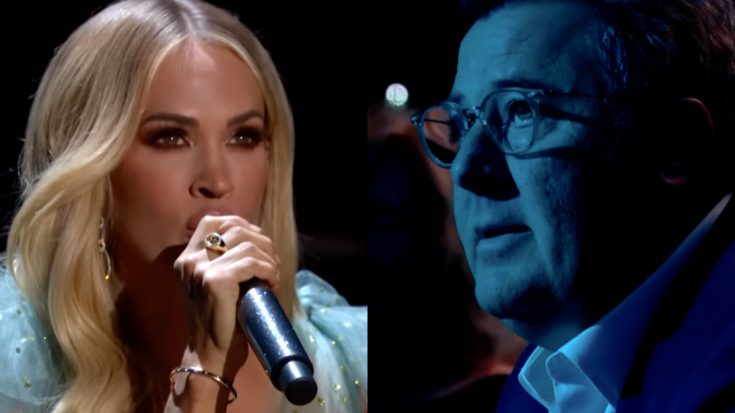 Carrie Underwood was one of several artists who gathered this week to honor Vince Gill for the CMT Giants television special.

The 65-year-old was honored as the artists performed some of his biggest hits. Other special guests, including Emmylou Harris, Keith Urban and Reba McEntire, appeared to “share personal stories, reflect on their time working with Gill and speak to his forever impact on country music.

One of the most impactful performances of the night came from Carrie Underwood who took the stage to sing Gill’s 1995 hit “Go Rest High On That Mountain.”

Vince started penning “Got Rest High” in 1989 following the death of country singer Keith Whitley. He completed the song after the death of his older brother Bob who died of a heart attack in 1993.

“I wrote it right after my brother died,” Gill said in 2014. “I wasn’t going to record it, I didn’t want to. But [producer] Tony Brown talked me into it…When people are hurting the most, in the worst place they can be, they’re reaching out to that. To that song. And that means way more to me than where it landed on the charts.”

Vince Gill enlisted the help of fellow artists Patty Loveless and Ricky Skaggs for the song’s background vocals. The result was one of the most powerful songs to ever hit country radio. But, it almost never got airplay. According to Tony Brown, the radio promotion department was concerned that the track was too slow for radio. Turns out they were very wrong.

“Go Rest High On That Mountain” not only saw popularity on country radio, but earned Gill the CMA Song of the Year trophy and two Grammy Awards.

The impact of the song can be felt with every performance, and Carrie Underwood‘s rendition on the CMT Giants special was no different. Underwood stayed true to the original style of the song as she delivered the powerful message Vince Gill wrote nearly 30 years ago.

Over the course of Vince Gill’s career, he has notched 19 CMA Award wins, 22 Grammy Awards, 30 million albums sold and induction into the Country Music Hall of Fame in 2007.

Hear Carrie Underwood cover “Go Rest High On That Mountain” by Vince Gill in the video below.