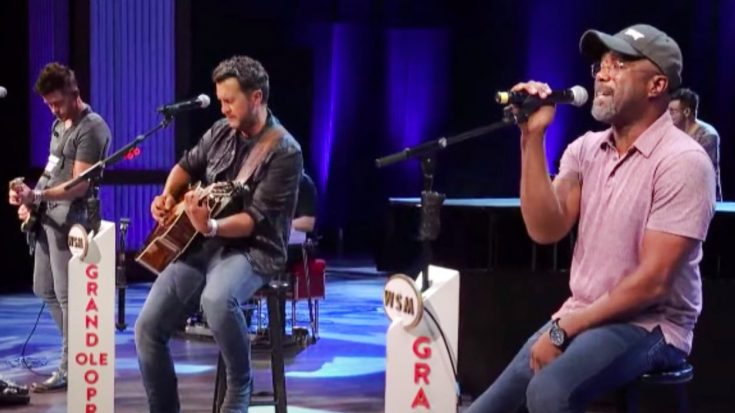 Even in the midst of everything going on in 2020, the Grand Ole Opry’s Saturday shows continued. When there was no in-house audience, country music fans around the world were able to tune in to the performances on the radio, on TV, or through online livestreams.

In addition to performing their own songs, Bryan and Rucker treated their audience to a cover of a 90s country staple. They saved this cover performance for the end of their show.

Before singing, Bryan and Rucker talked about how much they’ve been able to rest their voices since they haven’t been on tour this year. That conversation led Rucker to remark, “Our voices feel so good, let’s pretend like we’re Ronnie Dunn for a second.”

Rucker was referring to Brooks & Dunn‘s Ronnie Dunn, who sings lead on almost all of the country duo’s songs. He is often named as one of the best vocalists in country music.

But even though Bryan and Rucker knew they couldn’t sing “Neon Moon” like Dunn, they still gave the song their all.

“Neon Moon” was released in 1992 as the third single off of Brooks & Dunn’s debut album Brand New Man. The song claimed the #1 spot on the country charts in both the U.S. and Canada, and peaked at the #9 spot on Billboard‘s year-end Country Songs chart for 1992.

All of these years later, “Neon Moon” remains a country fan-favorite. Bryan and Rucker knew what they were doing when they picked the song to close out their Opry set.

Tune in to the clip below to see Bryan and Rucker offer their take on “Neon Moon.”