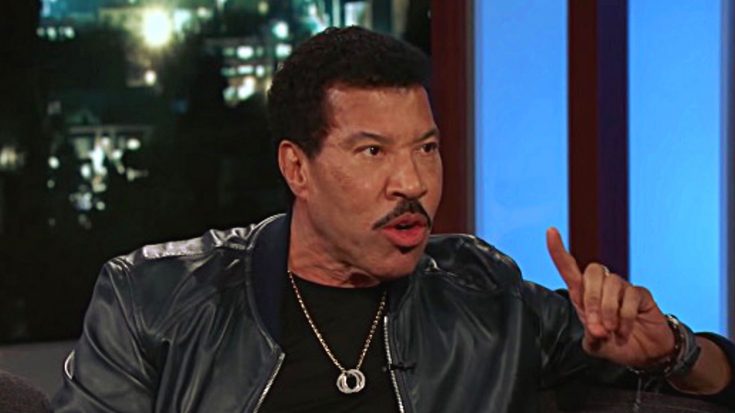 Lionel Richie and Kenny Rogers may have seemed like two unlikely friends, but they actually shared a stronger connection than you realized. It all started with a song.

As a country fan, we’re sure you’re familiar with Rogers’ hit song “Lady.” The romantic ballad was a number one hit on both the country and pop charts, and was the tenth overall most popular song of the 1980s.

“Lady” was written by a sole songwriter, and that songwriter was none other than Richie. After the song’s success, Richie teamed up with Rogers yet again to produce his album Share Your Love.

As you can see in the video above, Rogers and Richie maintained their friendship for decades. In fact, they were so close that they once vacationed together!

During a visit to Jimmy Kimmel Live, Richie brought up the fact that he once went on vacation with Rogers, and that he would never do so again. We bet you’re wondering why.

Well you’re in luck, because Richie had a wild story to tell about their trip to the Bahamas, which happened shortly after Richie wrapped up his 1981 hit “Endless Love.”

As Richie explained, the two of them were getting ready to go out on a boat when a storm started brewing:

“We’re falling into swells. The first thing [Rogers] said was, ‘There’s a storm coming.’ All the ships are coming in. Kenny casts off. We are going out to sea.”

Richie was understandably terrified, but the scary situation took a more comical turn when the Coast Guard got involved:

“Now, what happens? The Coast Guard shows up. Why? Cause the only damn fools in the whole world are drug dealers, trying to go out across…and of course they board the boat.“

If you want to hear how that wild vacation story wraps up, watch Richie’s full interview with Kimmel below.