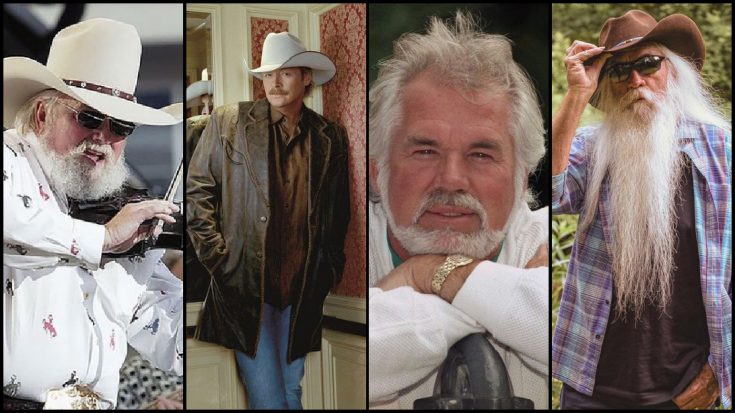 Some of country music’s greatest male artists are nearly as famous for their talent as they are for their facial hair. From Kenny Rogers’ beard to Alan Jackson’s mustache, we can’t get enough of these handsome fellas and their whiskers.

It’s hard to picture these guys without their signature stubble, but believe it or not, there was a time when country music’s bearded and mustachioed men were clean shaven. We’ve dug up photos of 8 of country music’s handsomest without the look we know them for.  Check out the photos below and let us know which picture surprised you the most.

Fans of Alan Jackson have rarely seen him without his mustache. A clean shaven Jackson can be seen in his engagement photo from 1978. Fans again got a glimpse of the “Livin’ On Love” singer sans mustache in his 2012 music video for “So You Don’t Have to Love Me Anymore.” For the video, Jackson traded his Tom Selleck-esque mustache for a five o’clock shadow…a different look than anyone has seen from the singer before. (Check it out in the video at the bottom of this post.)

Long before Chris Stapleton became an overnight sensation following his epic run at the 2015 CMA Awards, he was just the son of a coal miner with dreams of Music City. Stapleton ran with those dreams from his Kentucky hometown to Nashville where he he became one of the most sought after songwriters in Music City. Believe it or not, Stapleton’s signature beard hasn’t always been a part of his look. Thanks to his wife, Morgane, who shared a series of photos of her hubby sand beard, his fans now know what the “Starting Over” singer looked like prior to growing out his hair and beard.

We didn’t have to go back very far to find a photo of a smooth-faced Thomas Rhett. The “Die a Happy Man” singer shaved his beard in 2020 in preparation for a recreation of a scene from Hocus Pocus for Halloween. A few months prior T.R. shaved his beard for the first time in five years and shared that he “immediately felt 10 years younger.”

We had to dig deep to find a photo of Kenny Rogers without his beard. Considered to have one of the “manliest beards in facial hair history,” Rogers spent most of his career with a neatly trimmed facial hair that made him one of the most recognizable faces in music.

Few photos exist of Zac Brown, lead singer of the band that boasts his name, without a beard. But, a former member of Brown’s high school barbershop quartet shared a photo of the “Chicken Fried” singer from 1996. The black and white photo appears to be from a yearbook and shows a clean cut Brown standing alongside his fellow barbershop quartet singers.

We can’t think of a time in Trace Adkins’ career when he wasn’t donning facial hair. We had to go all the way back to a yearbook photo to find a whisker-free photo of the “You’re Gonna Miss This” singer. And, we can’t decide what we’re most impressed with….Trace’s sans-goatee look or the fact that he was rocking a Justin Bieber haircut before Bieber made it cool.

Luke Combs rose to country music stardom quickly and owned his signature style that includes a beard, blue jeans, a Columbia short-sleeved button up, and a red solo cup.

But, it’s not all love for Combs’ beard. In 2017, the “Hurricane” singer appeared on Jimmy Kimmel to read a mean tweet targeting him. “If you grow a beard like Luke Combs, don’t grow a beard,” the tweet read. Combs replied, “Thank you man, I appreciate that. I’ll take some vitamins for ya’.”

Perhaps one of the most iconic beards in country music belongs to the Oak Ridge Boys’ William Lee Golden. It appears that the Oaks’ baritone hasn’t shaved his beard in decades, a feat that makes Golden an expert in all things beards. In fact, the singer was the one who gave Duck Dynasty star Willie Robertson some tips about maintaining his rustic look.

“So, the guy from Oak Ridge Boys, who has a super long beard, he told me that the secret is the under beard,” Robertson told Fox News in an interview. “That’s where all the hair is. ‘Cause this just stops. So I kinda keep that. We have a spring cleaning usually.”

Late fiddle great Charlie Daniels has boasted a nice beard for most of his country music career. Thanks to Charlie’s social media team we got a rare look at a young, dark-haired Daniels sans beard in a photo with his wife circa 1964. The “Devil Went Down to Georgia” singer is arguably the most unrecognizable face on our list without a beard.

See Alan Jackson showing off a five o’clock shadow in the music video for “So You Don’t Have To Love Me Anymore” below.