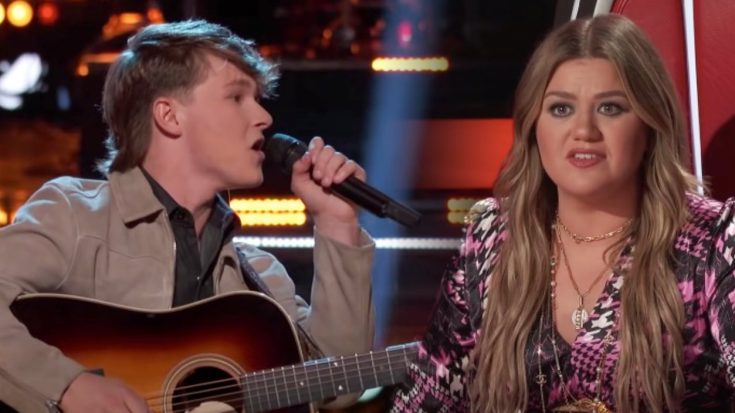 “Don’t Let Our Love Start Slippin’ Away” was released in 1992 as the second single off of Gill’s album I Still Believe in You. The song reached the #1 spot on the Hot Country Songs chart in the U.S. It was also a #1 country song in Canada.

As Shelton later noted, people are often hesitant to cover Gill’s songs, and understandably so. He has such a unique sound, and his songs are classics, so few people ever have the courage to cover them.

But Peters and Sherman were up to the challenge. They worked on their performance in rehearsals with Shelton and their team advisor, Dierks Bentley.

Bentley had high praise for Peters in particular. “Carson, your voice man is reminding me so much of the people who I love in country and bluegrass music,” he said. Bentley also said he thinks Peters “could be a big superstar” one day.

Peters showcased that superstar voice during his battle with Sherman. The coaches were enchanted by their performance from the start. Kelly Clarkson could be heard exclaiming “Wow!” and Ariana Grande shouted “I love this!”

After the battle was over, the coaches offered their compliments to both singers. But everyone kept circling back to how young Peters is (he’s only 17!) and how impressive it is to see him perform so well as such a young age.

Clarkson went so far as to compare Peters to one of the entertainment world’s most beloved figures. “Carson, I was like, oh my God, seventeen years old looking like a country Patrick Swayze,” she said. “I’m like what?”

As for what the duo’s coach thought of their battle, it made him proud. “You guys stepped up to the plate and did it, so thank you, great job,” he said.

It was a tough choice, but in the end, Shelton said he felt “like Carson had the edge.” He named him as the winner of the battle, and Sherman was sent home.

Shelton remarked, “[Carson’s] just got a few different gears he can go to as a vocalist. Carson’s only seventeen years old, and as a coach that’s very exciting.”

Now tune in to the video below to watch the battle. Both of these singers are so talented!