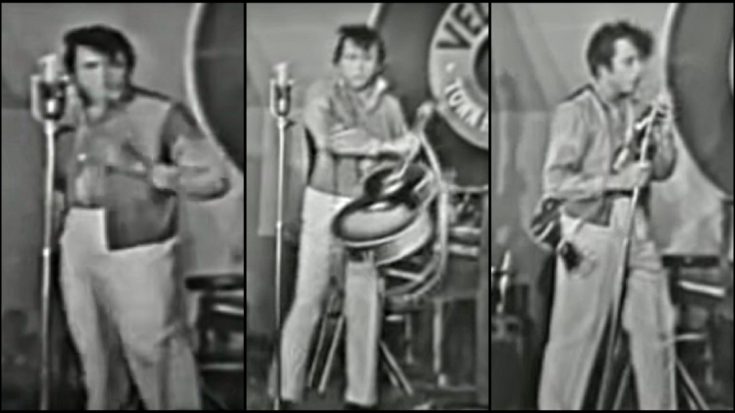 Johnny Cash was a man of many talents, but perhaps one of his little known skills was impersonating Elvis Presley.

The Man in Black crossed paths with the King of Rock & Roll many times throughout their careers, and the pair were part of the notorious Million Dollar Quartet along with Jerry Lee Lewis and Carl Perkins in 1956. While their career paths took them in different directions, the two became icons in their own rights with sounds and styles unique to them individually.

They two musicians remained friends, although not close, and shared a mutual respect for each other’s work. Proof of such is evidenced in video and audio recordings of Johnny Cash impersonating Elvis and vice versa. A video posted to YouTube shows Cash delivering his best impersonation of Presley in a television appearance filmed in 1959. Or, as Johnny worded it, “an impersonation of a rock and roll singer impersonating Elvis.”

Cash then turned up his shirt collar, pulled a comb out of his pocket, styled his hair in true Elvis fashion, and gave his leg a shake. The crowd laughed and yelled as Johnny “became” Elvis, but soon realized that his impersonation was a hilarious and exaggerated version of the singer. As Cash jerked his hips he pretended that his threw his back out. His vocals were spot-on, but his body movement and facial expressions were a keyed-up version of what Elvis was known for.

Elvis Presley returned the favor, although there aren’t any known recordings of Elvis impersonating Johnny, only audio recordings. While we wish we could see the King of Rock & Roll paying tribute to the Man in Black, we’ll settle for being able to hear his impressive impersonation with covers of “Folsom Prison Blues” and “I Walk the Line.”

Check out Johnny Cash showing off his comedic side with his hilarious Elvis Presley impersonation in the video below.