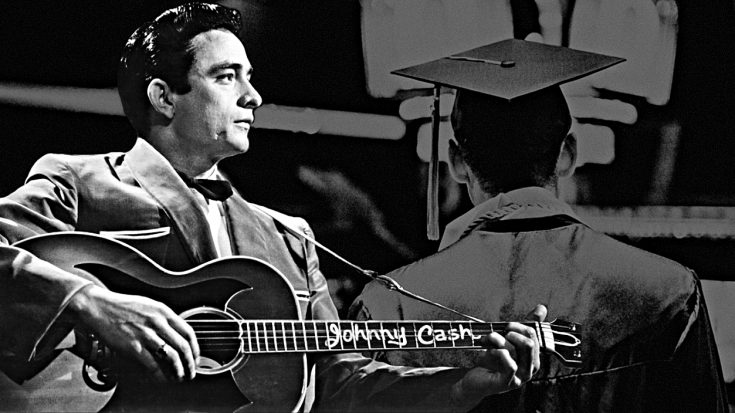 71 years ago, Johnny Cash, known as J.R. Cash at the time, took to the stage for the first time to entertain the graduating class of 1949, from Dyess High School.

Less than ten years later, after graduation and serving time in the military, Cash would begin his journey of becoming the legendary country music artist Johnny Cash.

Cash had always been a fan-favorite, easily getting along with students and heavily involved in school activities. He was elected class vice-president in his senior year and served as an officer for the FFA (Future Farmers of America.)

Although his music knowledge was limited, he loved singing and was learning to play the guitar. He’d only ever gotten the chance to see two concerts in his lifetime, the Louvin Brothers in the high school auditorium and a field trip to the Grand Ole Opry, that just happened to feature his future wife, June Carter, and her family.

During the graduation ceremony in 1949, Cash a junior at the school used the opportunity to entertain the graduates and the attendees with a performance of his song “Drink To Me Only With Thine Eyes.”

The song lyrics evolved from a poem written in 1616 by an English poet named Ben Jonson, called “To Celia.” The song was eventually released posthumously after tapes of multiple unreleased songs were discovered at the House of Cash studios. Forty-nine of those unreleased tracks were chosen and put into a compilation called Personal File, which was released in 2006. Several of the tracks featured on the two-disc compilation included Cash’s recorded voice recalling the memories and the significance of the songs to him.

Cash recalled the memory of performing “Drink To Me Only With Thine Eyes,” at the high school graduation saying, “It was such a strong memory for me…I can see me when I was 17 years old standing … at the senior-class graduation. I never forgot that because it was one of my first public singing occasions, and I have sung this song, mainly to myself, ever since I was 17 years old because of those memories.”

Listen to “Drink To Me Only With Thine Eyes” below.