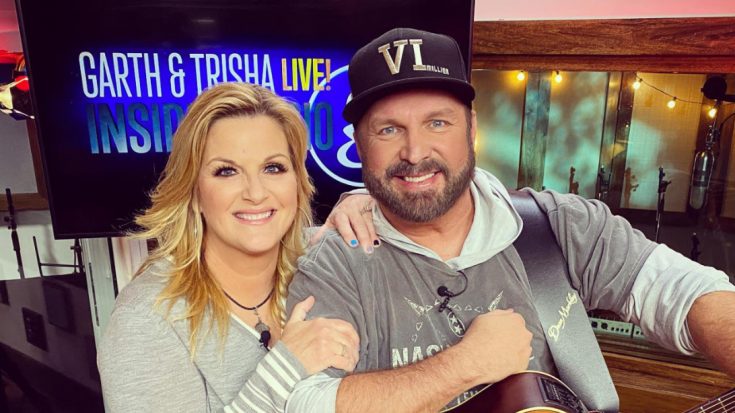 Garth Brooks says that Trisha Yearwood wanted to change her last name for their 15th wedding anniversary, but he wasn’t about to let it happen.

Garth Brooks and Trisha Yearwood said “I do” on December 10, 2005, at their home in Owasso, Oklahoma. Their nuptials came after years of friendship and collaborations while both were married to someone else.

The pair were introduced by songwriter Kent Blazy (“If Tomorrow Never Comes”) in 1987 when they were both demo singers recording in Blazy’s attic. Four years later, they teamed up for their first album cut together for “Like We Never Had a Broken Heart,” a song on Trisha’s 1991 self-titled debut album. Another collaboration following in 1997 when they recorded “In Another’s Eyes” for Trisha’s (Songbook) A Collection of Hits.

In an interview with Ellen, Garth Brooks admitted that he knew there was something special about Trisha Yearwood the moment he met her.

“Kent Blazy introduced me to Ms. Yearwood, and he goes, ‘I knew you were going to like her,'” Brooks recalled during an appearance on Ellen. “When she left, he goes, ‘What did you think?’ I said, ‘Well, it’s strange, because I felt that feeling like when you just meet your wife, but I’ve been married for 13 months.'”

Garth proposed to Trisha in May of 2005 at Buck Owens’ Crystal Palace in Bakersfield, California, in front of 7,000 people. But, their wedding was more of a private affair with the pair exchanging vows at their home in the presence of family members.

Trisha Yearwood kept her maiden name after her wedding, but in a recent interview, Garth revealed that she was willing to change it.

Prior to kicking off his sold-out five-night run of shows at Ireland’s Croke Park, Garth Brooks answered questions during a press conference. During his meeting with the press, the singer was asked if he is Trisha Yearwood‘s husband or if she is Garth Brooks’ wife. He replied, “I am Trisha Yearwood’s husband.” He went on to share a story about her gift to him for their 15th wedding anniversary.

“Her gift to me was she…” Garth paused as he tried not to cry. “She filled out the forms and all she needed was a signature to legally change her name.”

But, Garth said he wasn’t going to let that happen.

“If you knew Jack Yearwood [Trisha’s dad], one of the sweetest men on the planet. He had two daughters. The Yearwood name will not end with me,” Garth shared. “So, I said, ‘Please, don’t.'”

“The Dance” singer admitted that he wouldn’t have a problem with changing his own last name to Yearwood. “That’s how much I belong to that woman. I love that woman….I feel lucky to be in that relationship as long as she’ll have me.”