Ashley Judd Shares Her Feelings About The Judds’ Final Tour 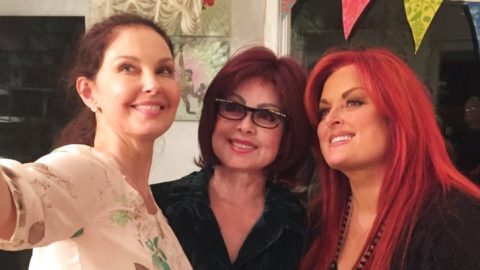 In early April, Naomi and Wynonna Judd announced they were embarking on “The Final Tour” as The Judds. This announcement came in connection with their performance of “Love Can Build a Bridge” during the CMT Music Awards.

Sadly, Naomi passed away on April 30, just one day before the Judds were inducted into the Country Music Hall of Fame.

During the HOF ceremony, Wynonna vowed she would keep singing in her mother’s honor. She’s held true to her word, and recently kicked off the Judds’ final tour as a tribute to Naomi.

Wynonna is receiving support on the tour from special guest Martina McBride. Other guests for various stops include Faith Hill, Trisha Yearwood, and Little Big Town.

The first show was in Grand Rapids, Michigan on September 30. The second show was held in Toledo, Ohio, on October 1. Wynonna shared a video of the Toledo crowd singing along with her, and captioned it “WOW. JUST WOW.”

Wynonna’s younger sister, Ashley, shared her feelings about the tour after the second night. She wrote:

“Tonight: The second city (#toledo) of Sister’s gorgeous, poignant-beyond-description, profoundly heartfelt Judds concert. 26 songs, unlimited memories, countless tears as well as smiles, we uplift our beloved mother, hold each other, make community, and rock to the rhythm. I hope to see you somewhere along the tour and thank the one of a kind @brandicarlile for joining our family this weekend. Thank you also @martinamcbride…“

Ashley said she was “so happy” to see old and new fans who want to hear Wynonna sing the Judds’ “iconic music.”

She ended her message by writing:

You can read all of Ashley’s thoughts about the Judds’ final tour below. As always, our prayers go out to her and Wynonna.