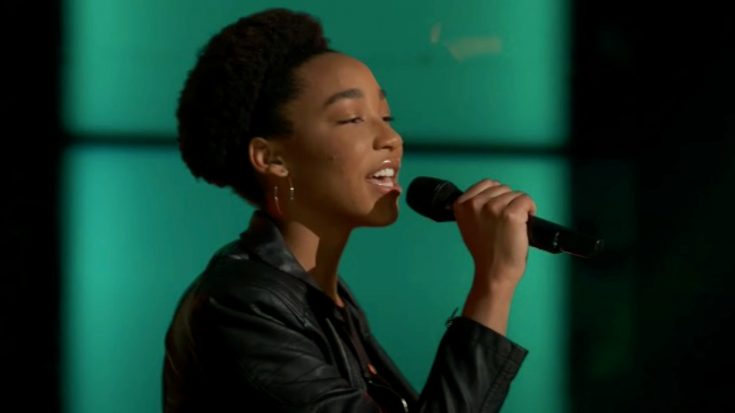 Two Voice coaches were “Crazy” for one performance they heard during Season 22’s blind auditions.

17-year-old Daysia took to the Voice stage with her rendition of a country classic…Patsy Cline‘s “Crazy.” It’s a song we’ve heard performed many times on various versions of The Voice through the years. So there was surely a lot of pressure weighing on Daysia to make her rendition stand out. Though if that was something she was concerned about, it didn’t show. Her version of the song was sweet and smooth, and she sang with confidence.

The coaches listened as Daysia’s voice flowed effortlessly through the notes. No one turned their chair right away, but all appeared intrigued by the sound of Daysia’s voice.

Toward the end of the song, Gwen Stefani noted how “pretty” she thought the young singer sounded. Her husband Blake Shelton agreed, and decided to turn his chair. Gwen followed right behind him…giving Daysia a well-deserved two-chair turn!

“I’m a little bit nervous right now, because I don’t think my wife is gonna roll over on this one,” Blake said. “But I’m gonna fight.”

“Let’s see what fighting looks like in our marriage,” Gwen joked.

Blake went on to praise Daysia, saying, “I just thought you had an incredible voice, and you look like a star standing there, you do.”

Though Blake admitted he was a bit worried, because he saw how excited Daysia got when Gwen turned her chair. Knowing Daysia may not pick him as her coach, Blake said no matter what happened, he was still happy to have her on the show.

It was then time for Daysia to make her choice. Since she sang a country classic, you’d think she’d pick Team Blake. But she made it clear from the start that she was a huge fan of Gwen…and she picked her as her coach!

Head below to watch Daysia’s stunning performance of “Crazy” and see how she landed on Team Gwen.