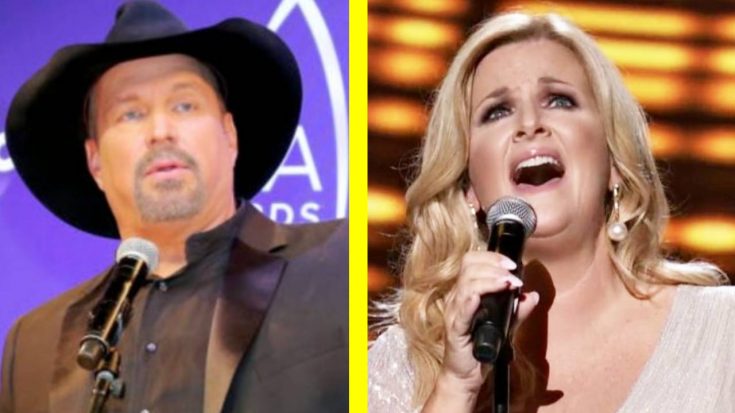 At the 55th Annual ACM Awards, Trisha Yearwood performed a song off her latest album Every Girl during the somber In Memoriam segment, paying tribute to all the lives country music lost in the past year.

Standing on the Grand Ole Opry stage with no audience, Yearwood powerfully performed her song “I’ll Carry You Home.” It was the first time she performed the song live and as she sang, a montage of photos of stars who died in the last year were displayed on a screen behind her. Kenny Rogers, Joe Diffie, Charlie Daniels, John Prine, Jan Howard, Jimmy Capps, Busbee, and many more were honored.

But, in a new interview with Country Aircheck, ACM Awards executive producer RAC Clark reveals that if he and the other producers got what they initially wanted, it would have been Garth Brooks performing during the In Memoriam, not his wife.

Clark said, “We started with the idea of individual performances honoring Kenny Rogers, Charlie Daniels and Joe Diffie, then I said, folks, I think this is a mistake. We’ve lost so many people. That’s when I turned to the folks at the Academy [of Country Music] and said, you’ve got to curate this list.”

They came up with the idea of having Brooks perform his song “The Dance,” so they asked the 10-time ACM Entertainer of the Year, who basically said, “No.”

Clark said, “He responded, ‘Listen to Trisha’s song [‘I’ll Carry You Home,’]’. Of course, it was so appropriate.”

And so, Yearwood performed “I’ll Carry You Home,” which turned out to be incredibly beautiful and the perfect song for that portion of the awards show. Watch it below.