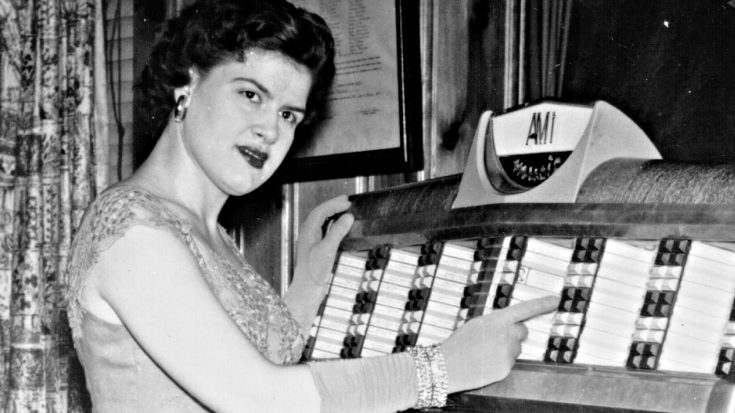 While Patsy Cline is one of the most famous names in classic country music, her career was, notably, one of the shortest…

From the early 1950s up until her death in 1963, Cline only released three full studio albums – but none of them ever indicated she had once been professionally known as a singer under a different identity.

Step into Patsy's "Shoes" and check out these handwritten lyrics! More artifacts like this await at the Patsy Cline Museum, open for visitors daily 9AM – 7PM. pic.twitter.com/BcG71SpDR4

In the mid-1950s, a young Patsy Cline was rising quickly through the ranks of up-and-coming country singers and very much trying to make a name for herself. As she became better known and forged strong industry connections, she scored a #2 hit song with “Walkin’ After Midnight.”

This 1957 release would be the hit song that fueled the fire of her success for years to come. But, with a mega-hit on his hands, the president of her first record company decided they should maximize the return by releasing it in a whole new way.

Be Patsy's guest. Take a look into her dining room, recreated with original furniture and decorations, at the Patsy Cline Museum. Open daily, 9AM – 7PM. pic.twitter.com/tKpOj21OnJ

To capitalize on the song’s incredible success, 4-Star Music Sales president Bill McCall, began drumming up chatter about the “first male version” of “Walkin’ After Midnight” which was cut and released by a man called Calvin Coolidge – who shared a name with the former president.

Coolidge’s version was pressed into about 250 copies that were primed for distribution to radio…but along the way, they never were released.

To many folks’ surprise, “Calvin Coolidge” was actually Patsy Cline.

McCall had taken the original recording of Cline and slowed it down to a haunting 33 RPM before having it pressed into a single that would be played at 45 RPM – causing a distortion in the voice that made Cline’s already-deep voice much more similar to those of her male colleagues.

There is very little information about how this interesting twist came to fruition, but proof does exist and it can be found in the Patsy Cline Museum. Because it was never actually released, many consider this record to be one of the rarest treasures from her lifetime.

See Patsy Cline sing “Walkin’ After Midnight” (as herself)  in the video below.