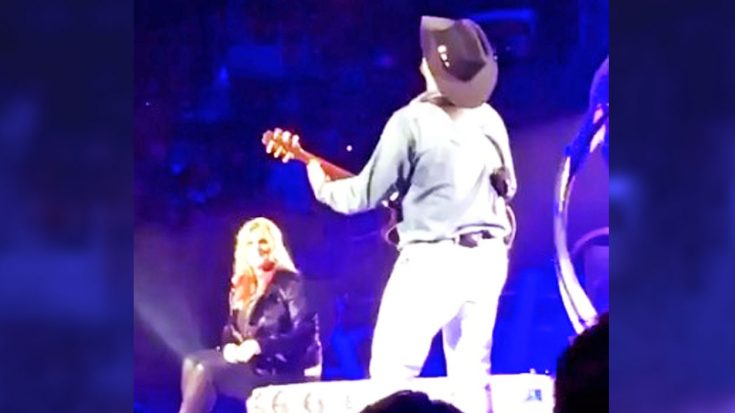 On December 10, 2017 Garth Brooks and Trisha Yearwood celebrated their 12th wedding anniversary. But the two didn’t get the chance to take any time off, because they had a show scheduled in Nashville that evening.

As they always do, Brooks and Yearwood made sure to include the fans in their anniversary celebration.

Brooks made the night extra special by bringing out 12 bouquets of flowers for Yearwood…one for every year they had been married. The bouquets lined the front of the stage, and Yearwood shared a few photos of them.

But Brooks’ greatest romantic gesture came through a surprise anniversary serenade. In the middle of the show, he brought Yearwood out to join him on the stage so he could sing her a special song.

The one he chose was quite fitting, as it was his number one hit from 1998, “Make You Feel My Love.”

Since country fans likely know Brooks’ version of “Make You Feel My Love” the best, they’d probably be surprised to hear that it didn’t originally start out as a country song. In fact, the tune was penned by Bob Dylan, but was first released on a commercial scale by Billy Joel.

His recording was a decent success, and Dylan followed up by releasing his own version that same year.

Brooks came in next, and his recording of “Make You Feel My Love” appeared on the soundtrack of the 1998 film Hope Floats. That same soundtrack also included a cover of the song that was recorded by Yearwood.

In 2008, ten years after Brooks debuted his recording of “Make You Feel My Love,” British pop singer Adele released her rendition. As proof of the song’s timeless nature, it was once again a major hit, and reached the fourth spot on the charts in the UK.

With so much history behind it, there’s no denying how much the tune means to Brooks and Yearwood. So you can bet that Yearwood was quite touched when Brooks began serenading her with the song during the concert that took place on their anniversary.

Multiple fans captured the romantic moment on camera. One was quite close to the stage, and managed to film Yearwood’s reaction. She appeared visibly emotional as she looked up at her husband, and had a look of pure love in her eyes.

So tonight was their 12th wedding anniversary & Garth had bouquets of flowers all over the stage tonight for Trisha, & moral of the story is that I just want a love like @garthbrooks and @trishayearwood ???? #IsThatTooMuchToAsk pic.twitter.com/MLuzBTIvAL

Another fan managed to capture the entire serenade, though the video was taken from a more distant perspective.

Still, you can feel the love between Brooks and Yearwood, especially when Brooks remained silent while he let the crowd sing to her instead.

You can tune in below to watch all of the romance unfold. We’re sure that no one in attendance will ever forget this special moment!

Garth surprised Trisha on their 12th Anniversary tonight and sang “To Make You Feel My Love” to her! So sweet! @garthbrooks @trishayearwood pic.twitter.com/EVYJpXwEGo