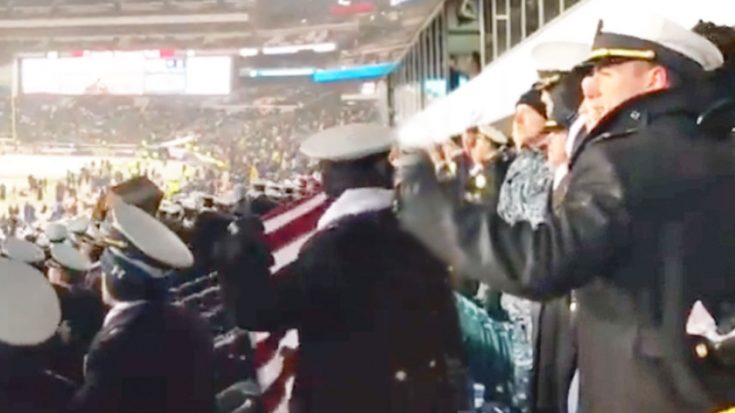 One of the most anticipated college football games of the year is most definitely when Army and Navy play each other.

Prior to the game, The Naval Academy and West Point glee clubs came together to deliver an incredible National Anthem, while country singer Lee Greenwood provided a special performance of his iconic song “God Bless The USA.”

Greenwood took to Facebook prior to kickoff, expressing his support and gratitude for both teams, but ultimately “pulling for Navy,” in honor of his father who served in the US Navy.

Sound check done for the Army Navy game! My Dad joined the Navy 76 years ago yesterday – the day following the bombing…

While Greenwood has performed this song at countless events, it has rarely hit us harder than it did during this particular game. After you press play on the video below, you can hear everyone in the stands singing along to Greenwood’s 1984 hit song. It is such an incredibly inspiring feeling listening to the men and women who have signed up to protect our country sing the lyrics to “God Bless The USA.”

Swaying together arm in arm and holding up the American flag, the servicemen and women occupying the seats at Lincoln Financial Stadium began chanting, “USA! USA! USA!” after Greenwood’s final note, giving us the chills.

Watch the crowd sing along to Greenwood’s performance “God Bless The USA” below.

Very refreshingly, not a single knee was taken Lee Greenwood