Trace Adkins Takes A Stand For America In ‘Still A Soldier’ 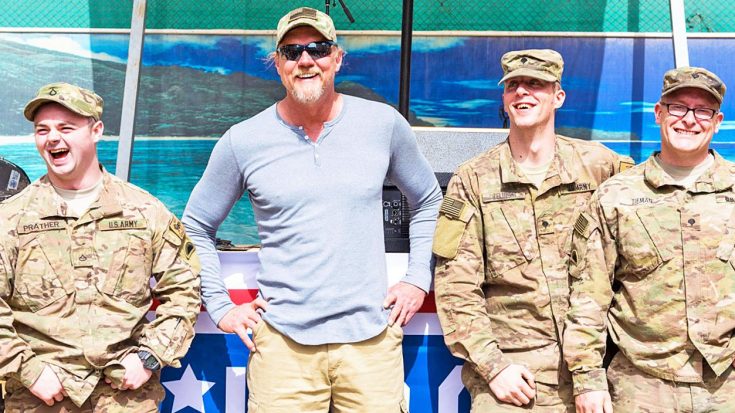 As far as country stars go, Trace Adkins is as patriotic as they come. Through his music and his actions, Adkins has made it clear that he will always be proud to support the U.S.A. and our men and women in the armed forces.

Adkins is one of a handful of country stars that tours overseas through the USO. These USO tours have taken Adkins to visit troops stationed all around the world, in places such as Iraq, Afghanistan, and Kuwait.

Here are some behind the scenes shots of Trace's trip to Ft. Campbell with 101st Airborne Division (Air Assault) & 101st CAB, Wings of Destiny! #USArmy @cmt

During a media event, Adkins revealed that his 2017 USO tour would take him to Italy and Spain. In addition to his touring schedule, Adkins kept busy over that year with the release a new album, Something’s Going On.

Once A Soldier, Always A Soldier

One of the songs on that album stands out more than any other. Titled “Still a Soldier,” the track is a patriotic tribute to America along the lines of Adkin’s previous releases such as “Arlington” and “‘Til The Last Shot’s Fired.”

Written by Phil O’Donnell and Wade Kirby, “Still a Soldier” has Adkins taking a stand for the U.S.A. and the men and women who risk their lives to protect it. The song follows a former soldier through his daily life, as he enjoys time at home watching football, going to church, and being with his wife.

Although the man is no longer enlisted, Adkins sings that he will always feel like a soldier.

“He’ll stand up when he hears the Anthem and that won’t ever change. He’s still a soldier. His blood runs red, white, and blue. He put away his gun and boots, but he still believes the American dream. ‘Til his last breath he’ll always be, a soldier.“

With a soft instrumental track behind him, Adkins pours heart and soul into every word of “Still a Soldier.” His connection to the lyrics is something you can clearly hear and feel through his voice, making the song all the more powerful.

Now it’s time for you to hear this stunning track. You can catch Adkins’ official video for the song below.

The official music video for "Still A Soldier." Cast your vote for the video on CMT Hot 20 Countdown: tadkins.co/CMTHot20